If you are going to write tickets and then blame it on trying to meet a ticket quota, you might want to make sure there are actually quotas in place, since writing tickets to dead people is not enough of a fail. 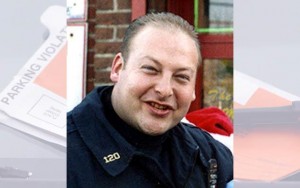 A cop who was canned for ticketing dead people says he was doing it to meet the NYPD’s supposedly non-existent monthly quotas.

In papers filed in Manhattan Supreme Court, Paul Pizzuto says he started issuing bogus summonses after brass at the 120th Precinct in Staten Island told him he had to produce more than the 125 to 150 he was already writing.

“Specifically, [Pizzuto] was told that he needed to start issuing more summonses for red-light and seat-belt violations” and was warned he would be moved “if he did not issue the increased number of summonses,” the suit says.

The 17-year vet says he had “always issued summonses to motorists who deserved the summonses” and “did not want to issue summonses just to fulfill an increased quota,” the suit says — so he hatched a scam to fudge his numbers.

Pizzuto “prepared summonses by taking information from legitimate summonses that he had issued in the past. But he prepared the summonses in such a way that [they] would not impact any motorists,” the filing says.

He was busted for the scam in July of last year, after his colleagues noticed he never had to testify about the tickets.

At the time of his arrest, police said his reasons for writing the bogus tickets — some of which were written to motorists who were long dead — were far from altruistic.

The married father of two had been having severe financial problems and had been doling out the tickets as a way of padding his overtime, cops said.

Pizzuto, 41, who pleaded guilty in May to three counts of falsifying business records, was sentenced to 150 hours of community service. He was officially fired in June.

Pizzuto contends that his firing was improper because he didn’t get a hearing first.

The NYPD contended it didn’t need to give him one, because it considered his actions an “oath of office” offense, which is defined as a crime arising from “knowing or intentional conduct indicative of a lack or moral integrity.”

A rep for the NYPD did not return an e-mail for comment. A rep for the city Law Department said they had not yet seen the suit and declined comment.

Another Costa Rica Earthquake in Samara of 5.6 Degrees