Experts say a new strain of norovirus from Australia is causing most of the recent stomach illnesses here in the United States. Norovirus is highly contagious, and is the leading cause of gastro-intestinal illness. 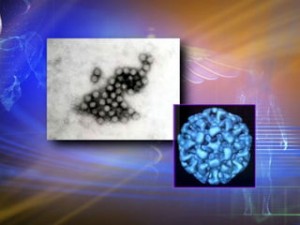 Researchers at the Centers for Disease Control say the new stomach bug strain spread rapidly across the U.S.

From September through December, the bug was the leading cause of norovirus outbreaks in the country.

Last month, the new strain accounted for 58 percent of outbreaks of norovirus nationally, according to the CDC.

The norovirus season typically runs from November through March and peaks in January.

This year, that happens to coincide with an early and severe start to the flu season.

Health officials say many people mistakenly call norovirus the stomach flu, but there’s no connection to the flu at all.

Norovirus typically begins very suddenly and lasts from one to three days.

One British scientist called it the “Ferrari of the virus field” for its ability to spread rapidly.

Fewer than 20 virus particle are enough to infect someone.

The disease is most severe in the elderly and can also hit children hard.

Most people recover without treatment.

The best way to prevent infection is to wash your hands frequently with soap and water.

And since norovirus can live on hard surfaces for weeks, its important to clean contaminated surfaces.

The CDC recommends using a bleach-water mix or bleach wipes.

And make sure to saturate the surface then let it dry. That’s called the “kill time.”

Only in Costa Rica for Week of January 28th