Health News – Researchers have found a genetic mutation that turns people into Martians — at least when it comes to sleep patterns. 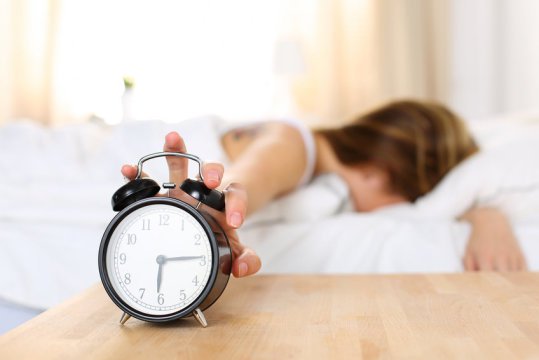 People with the mutation tend to be night owls because it keeps them on a perpetual 24 ½ hour schedule — close to the Martian 24 hour, 39 minute day, researchers reported in the journal Cell.

With their body clocks always running a little longer than everybody else’s, it’s like having perpetual jet lag, the researchers at the Rockefeller University report.

“Carriers of the mutation have longer days than the planet gives them, so they are essentially playing catch-up for their entire lives,” said Alina Patke, who headed up the research effort.

About 1.2 percent of people carry one or two copies of the mutation, so it doesn’t explain why so many people are night owls. But it’s one of many known to change the body’s internal clock, the so-called circadian rhythm.

“It’s as if these people have perpetual jet lag, moving eastward every day,” said Michael Young, who oversaw the study. “In the morning, they’re not ready for the next day to arrive.”

The mutation is in a gene called CRY1 and when people have it, every cell in their body runs on the wrong time. They can end up being night owls but often, the effects are much more disruptive, Patke said.

“For some, it causes a fragmented sleep. They actually went to bed rather early. They only slept for about two hours. Then they took long naps throughout the day.”

Circadian rhythm affects more than just sleep patterns. The people with the mutation also have disrupted cycles of body temperature, and Patke’s team wants to study other effects — such as the risks of various diseases.

The team found six Turkish families affected by the mutation. It didn’t matter whether people had one or two copies of the mutated gene, it affected circadian cycles in the same way.

Patke described the case of one 46-year-old American volunteer who stayed in her team’s sleep clinic for three weeks to be studied.

She stayed in a studio apartment with no outside cues about time — no windows, no clocks, no television or internet access.

“They didn’t know what time of day it was,” Patke said. “The idea was to see what they lived like when they were just controlled by their own clock.”

The volunteers, including the woman, didn’t sleep eight hours straight. Instead, she slept in fits and starts, although the normal sleep brain wave rhythms were typical, with the usual transitions into and out of rapid eye movement (REM) sleep.

Left to their own natural devices, they had a 24 ½ hour daily schedule.

“Her internal clock is one closer to one from another planet,” Patke said.

That might help some people who want to work at NASA, Patke joked. “I remember reading that for people who control these Mars rovers at JPL (NASA’s Jet Propulsion Laboratory), they have to work on a Mars sol (day) cycle. The rovers are only active when the sun shines on Mars,” she said.

NASA may even want to recruit people with the mutation to eventually travel to Mars, so they’d be less prone to the jet lag that will almost certainly affect Mars visitors.

“Somebody who has that mutation might be well suited as a volunteer but there may be more factors that go into that,” Patke said.

Patke is herself a night owl and tested herself for the genetic mutation. She doesn’t have it.

Other genetic mutations almost certainly underlie tendencies to be morning larks or night owls. And there are ways to cope.

“An external cycle and good sleep hygiene can help force a slow-running clock to accommodate a 24-hour day,” Patke said. “We just have to work harder at it.”