World News – All this FBI most wanted suspect needed to do was make it one more country down and he could have lived out his life in Costa Rica with no problems. 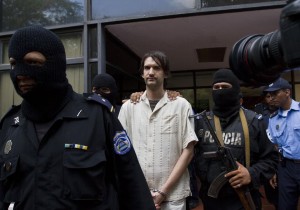 Police in Nicaragua have detained Eric Justin Toth, a child-porn suspect and one of the FBI’s ten most-wanted fugitives.

The head of detectives for Nicaragua’s National Police force says Toth was detained near the Honduran border. It seems that more and more criminals and drug lords are realizing that if they can make it all the way to Costa Rica they are home free.

The same thing happened with the Mexican drug dealers caught at the border. They were able to perform business as usual in Costa Rica and were only caught my Nicaragua law enforcement.

Glenda Zavala said Monday that Toth had been detained Saturday, based on an international detention request.

He lost his teaching job in 2008 after another teacher found images of child pornography on a school camera in Toth’s possession. He then disappeared.

The FBI had offered a $100,000 reward for information leading to the arrest of the 31-year-old Toth.