Costa Rica News – We all know people come down to Costa Rica on vacation and sometimes leave their brains at the airport gate in their home countries. This not only goes for normal every day people but also for celebrities.  However, when it comes to celebrities there is usually someone with a camera catching their transgressions. 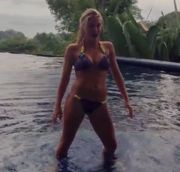 The most recent well known person to have her actions recorded in Costa Rica was Kelly Hall,

Are you familiar with Matthew Stafford’s girl, Kelly Hall? Everyone seems to be crazy about this entertaining lady. The beloved girlfriend of the Detroit Lions quarterback took a vacation to Costa Rica this past week.

While Stafford and the Lions were continuing their preparations for the upcoming season, she was partying privately, or so she thought. Her vacation became public pretty quickly, as she was acting out at every turn.

Pictures of her at a waterfall were the first thing to go public. Next was the, now famous, “pool dancing,” which many, including Hall, have called “drunk modeling.” She was definitely drunk.

Her terrible variation of the “cat daddy” dance is coupled with Ace of Base blaring in the background. She pretty much hits her hair and face into the water repeatedly, almost falling a couple of times in the video.

It seems Stafford has a pretty girl who likes to party.

Let’s hope he doesn’t lose his focus on the field this year.