World News – Well it seems that people are wanting to advertise everywhere they can today in order to get a leg up (pun intended) on their competition. 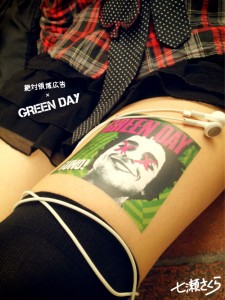 The spreading epidemic of media placement seeping into every nook and cranny of your daily life is something known in the advertising industry as Ad Creep.

Well, media placement doesn’t get much creepier than this.

Japanese PR company Absolute Territory has begun paying young women (18+) to wear advertising stickers on their thighs between the edge of their miniskirts and their high socks.

As of November of last year, over 1,300 women had applied for the agency’s service, and their number is growing fast, according to Oddity Central.

After choosing a sticker ad, the woman has to wear it for at least eight hours a day, or more, for a set period of time, in order to receive payment. To prove they are actively going out and promoting their thigh ads, they have to post photos of themselves wearing the stickers on their Facebook, Twitter or other social media accounts.

Thigh-vertising actually has been tried before. But in that case (in New Zealand), the ad agency tried to trick women into getting an ad imprinted on their legs.