As we approach the wait for the beginning of 2013 there are some foods that can help welcome in the new year and possibly bring luck to you or tour New Years party guests. 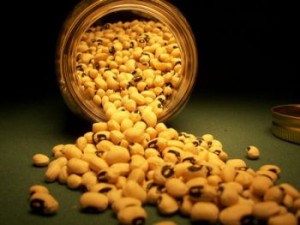 We all could use that little extra something for 2013, couldn’t we? Cultures around the world have various beliefs and superstitions about the best food to eat to presage a lucky or happy new year.

Pork is favored by some because a pig roots forward to search for its food (as opposed to other animals who root backward); pork and sauerkraut is eaten by the Pennsylvania Dutch and others of German extract in part because eating sour cabbage on New Year’s is thought to bring on sweetness for the rest of the year.

In Italy (and other cultures) lentils are thought to resemble coins and portend good fortune in the New Year. A specialty sausage of the Emilia-Romagna region called cotechino is a traditional New Year’s accompaniment; it’s made in St. Louis at Volpi’s on the Hill and Salume Beddu on Hampton Avenue.

Like lentils, black-eyed peas are also sometimes viewed as stand-ins for coinage, although the stories behind Hoppin’ John as a New Year’s tradition are varied. One says that the discovery of black-eyed peas in besieged Civil War Vicksburg, Miss., saved many from hunger. From then on, black-eyed peas were a sign of good luck. The dish, however, has unclear origins that date much earlier than that.

Preserved fish is another New Year’s tradition in many different forms and in many European countries. You’ll need to get started at least two days in advance, but gravlax (cured salmon) is relatively easy to make and beautiful to present.

Set out a buffet of all four at your New Year’s Eve or New Year’s gatherings, and perhaps one of your guests will have just a slightly better chance of hitting a $100 million Powerball jackpot in the new year.

What Kind of Car to Bring to Costa Rica?