World News – Mud houses in the mountains crumbled as a 7.7-magnitude earthquake shook western Pakistan early on Tuesday. Meanwhile, on the coast, residents of Gwadar saw a solitary island rise from the sea. 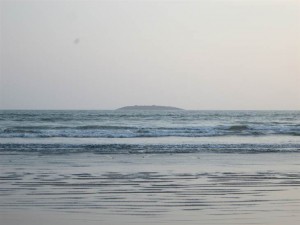 Older residents of the coastal town said the land emergence was déjà vu — an earthquake in 1968 produced an island that stayed for one year and then vanished, Ali Mohammad, 60, and Azeem Baloch, 57, told NBC News.

Seismologists suspect the island is a temporary formation resulting from a “mud volcano,” a jet of mud, sand and water that gushed to the surface as the temblor churned and pressurized that slurry under the ocean floor.

“Sandy layers underground are shaken, and sand grains jiggle and become more compact,” John Armbruster, a seismologist at the Lamont Doherty Earth Observatory at Columbia University told NBC News. The shifting sand layers are compacted and pressurize the water, which gushed upwards, carrying mud and sand along with it.

This “liquefaction” of sand and mud layers take place after any earthquake, but these sudden islands are usually spotted after strong earthquakes, at least 7- or 8-magnitude events. The distance of the island from the epicenter of the quake is “a little bit surprising,” Armbruster said, granted that “the sediments are quite soft and susceptible to this.”

Back in the 1940s, a sizable island rose from the sea in the area, but it didn’t last long. After an earthquake near Karachi struck, the British Indian Geological survey recorded a new island “big enough that people could land a boat and walk on it,” Armbruster said. “Within days, weeks” — he wasn’t sure how long — “it washed away.”

Researchers at the United States Geological Survey are investigating the new formation, Paul Earle, a USGS geophysicist told NBC News, but have yet to get independent confirmation of it.

It is clear that “the islands are not created because the ground was … pushed up by the earthquake,” he said, but more likely it was a secondary effect of shifting sediments. He also agrees the formation appears to have been caused by a mud volcano, but added that they don’t need an earthquake to set them off. There are “mud volcanoes in Yellowstone that have not been triggered by earthquakes,” he said.

While mud volcanoes are typical of watery, loose sediments layers off the coast of Baluchistan, more substantial instant islands — or “land uprisings” — do suddenly appear in other parts of the world, Stephan Graham, a geologist at Stanford University told NBC News.

They’re typically seen along fault lines where one tectonic plate slides under another, like the hungry subduction zone under New Zealand. Fault lines like the San Andreas, at which the Pacific Plate and the North American plates slide past each other sideways, are less likely to see such upcrops, Graham said.

It also takes a pretty sizable earthquake to push up an entirely new land feature. “You wouldn’t expect to see it in a 3- or 4-magnitude [quake],” Graham said, it would take a stronger temblor of 7 or 8 magnitude to change the landscape.

The Art of Traveling With Parents in CR

When Should an ESL Teacher Come to CR?