Descartes was wrong. He should have said: I think, and therefore I am divided. Then perhaps the world would not be so divided between East and West, North and South, Christianity and Islam. 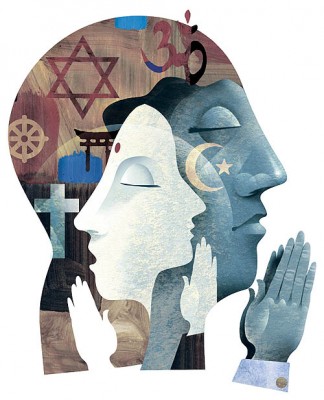 Division, conflict, and war emanate from within people, not from economic or political structures. As much as social structures contribute to the inequity and injustice of this world, they are not the source of division and conflict. The world is the outward expression of the minds and hearts of every person in it.

This is obvious, and yet the inner origin of human division and discord is rarely seen, and even more rarely discussed. With the exception of poetry, which is a universal language of the human heart, and rare mystical writings in Buddhist, Islamic and Christian traditions, there is no language for the inner landscape. Organized religion has nothing to do with religious experiencing, and is in fact antithetical to it.

When one travels with sensitivity, or lives in a very different culture than the culture one grew up in, one emotionally realizes that people truly are the same psychologically.

That’s very different thing than the globalizing sameness. The earth is becoming flat, to paraphrase the title of a shallow tome written with unintended irony. The pathological paradox is that as global sameness spreads, division based on increasingly superficial differences of language and culture also increases, out of a desperate need for identities of differentiation.

Inwardly, we are divided, and that makes differences appear to be primary. Without division, differences are a source of variety. They only become a source of division and conflict when one doesn’t see that people are essentially the same everywhere.

The antidote to global sameness is not a sentimental, nostalgic return to a previous era, or finding and escaping to (and thereby destroying) the few remaining places that tourism, trade and technology have not leveled like a tsunami. The antidote to sameness is not external at all; it is internal, in the art of daily discovery through the recovery of the capacity to see nature, people and the world afresh.

Not only the old, but increasingly the young are unable to have an innocent mind, which entails negating the memories of yesterday, and leaving the ever more crowded and polluted stream of the known.

Is that what will begin to end what has become, in this shrinking world, an exponential growth of a tremendously dangerous and destructive habit of psychological separation?

The root of division between people is the separation within people between ‘me and my thoughts.’ In actuality, there is no separation between my thoughts and me; they are one chattering movement, which ends in attention when the observer is negated in awareness.

It takes an intensive, and yet passive observation to dissolve the illusion of the separate self. The key is not to interfere with what one feels and thinks, but just watch one’s associations and emotions as they arise, allowing awareness to grow quicker than the habit of thought dividing itself from itself as the observer.

Then unwilled, undirected attention gathers and quiets the mind, giving peace to the heart. But when the ‘I’ makes efforts to reach an inner goal any kind, the essential quality of undivided, non-interfering observation is denied.

Intentional actions involve effort. But do they require a psychologically separate self, which is the root of division?

Obviously, it takes goals, planning and effort to farm the land, build a house or program a computer. But goals and effort have no place in spiritual life. Indeed, they prevent inner growth.

New Age or old school methods of meditation all require intentionality, effort and will. And so they perpetuate division and conflict. But true meditation dissolves the duality between the thought and the thinker, and so dissolves at its source the divisiveness and fragmentation that is destroying the earth and humanity.

To awaken observation in which there is the action of observing without the observer is a difficult art, but I am sure anyone can do it if they question and experiment with observation within themselves. And when enough people begin to end egoistic activity through right observation, a revolution in human consciousness will ignite.

A cold wind bites into the skin as I ride my bike into the country on winter day in California’s Central Valley. A mound of snow shimmers in the distance, beyond the greening foothills.

Arriving at the little creek at the edge of town, I find that the recent rains have turned it into a small torrent. A short distance away a great sycamore sweeps upward, its white bark gleaming in the sun. The huge trunk has bifurcated, forming a beautiful symmetrical shape. Black and white magpies squawk from its bare, upper branches.

Under the cobalt sky, meditation comes gently, imperceptibly and as always, unexpectedly.

Is There a Problem with the Tap Water in Costa Rica? Montezuma’s Revenge CR Style?

Christmas Is Over; Welcome the New Year With Costa Rican Bullfights