World News – The craving for cocaine in the United States is carving apart rainforests in Central America as narco-traffickers seek new routes to ship their drugs and expand cattle ranches to launder their profits, according to a new study.

The region has been a conduit for drugs for “40 years, since the disco era when cocaine became widely consumed,” Kendra McSweeney, a geographer at Ohio State University and the study’s lead author, told NBC News. What’s new, she explained, is the explosion of smuggling operations based in Central America in response to increased anti-trafficking efforts in Mexico.

As the drug lords moved to the frontier lands of Guatemala and Honduras, they slashed the forests with landing strips for airplanes loaded with cocaine from South America and roads to move the goods further north, she and colleagues argue in a policy paper published Thursday in the journal Science.

What’s more, the traffickers plow their profits into cattle ranches and logging operations as a means to launder drug money, McSweeney said. In Honduras alone, she and colleagues found that annual rates of deforestation quadrupled between 2007 and 2011, a time that coincides with a spike in cocaine shipments through the country. 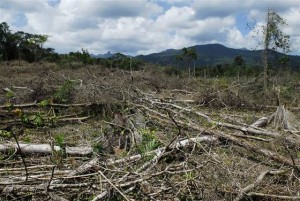 “I have no doubt that coca production causes deforestation both directly and indirectly — and for the latter, the authors make interesting connections,” Stuart Pimm, a conservation ecologist at Duke University in Durham, N.C., told NBC News in an email. He was not involved in the new study, which he noted is an attempt to find links to the drug trade amid complex patterns of deforestation that “span decades.”

Activities such as illegal logging and agricultural expansion have nibbled at the forest edges for more than 20 years in Central America, McSweeney noted. “What we are seeing now,” she added, “is almost cancer-like growths of really rapid forest cover change … It is a different pattern that can only be explained by the presence of narco-traffickers.”

Proving the connection between drug trafficking and deforestation is tricky. Conservationists largely left the region around 2007, citing safety concerns. Drug money has hushed government officials. But efforts, for example, to trace land ownership records in Guatemala paint a picture of new holdings under a single family, one that everyone knows is “a narco family,” McSweeney said.

That the drug trade causes deforestation “is quite clearly true,” Bruce Bagley, who studies U.S.-Latin American relations with an emphasis on drug trafficking and security issues at the University of Miami in Florida, told NBC News. He was not involved in the new paper. In addition to landing strips and money laundering, forests fall to drug plantations and associated eradication efforts, he noted.

The question, he added, is what to do about it?

Legalize it?
McSweeney and colleagues support a shift away from the policy of chasing drug traffickers to one focused on the demand side. Such a move is part of policy reform conversations underway at the Washington-based Organization of American States which released a report in 2013 that examines the shortfalls of the war on drugs.

What the demand-side focus should look like is up for debate, but some form of decriminalization or legalization of drugs may be in the cards, McSweeney noted. That strategy could take away profits from the traffickers.

“The more money and weapons you throw at trafficking, the higher the rewards for the people who make it through your net,” she explained. “So as long as the focus is on trafficking, the profits that accrue to successful traffickers are staggering and those profits are what fund deforestation through the laundering, it is what funds the corruption.”

Legalization experiments are already underway throughout the Americas, including marijuana in Colorado and Washington as well as Uruguay in South America, Bagley noted. Elsewhere in Latin America, such as Colombia, possession of personal doses of drugs has been decriminalized.

Going forward, he said, “We are going to see a lot of experimentation on alternative paradigms that move away from the prohibitionist model and the highly repressive US-led war on drugs that we have been championing for more than 40 years.”

John Roach is a contributing writer for NBC News. He started this role in November of 2005. Roach is responsible for environmental coverage on the website. Roach has also contributed to National Geographic News, MSN, and other outdoor and environment related media outlets.