Naked People Take to the Streets of Costa Rica

Costa Rica News – Naked people carrying baskets in their hands took to the streets in San Pedro this Friday, deciding to go for a nude stroll in public on a main street. 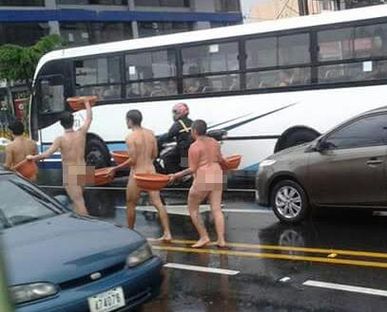 The police were called at 4 p.m and patrols were sent.

Three men and a woman were found, at that time by the train station of Universidad Latina, but by that time they had put on a little clothing.

Heavy traffic delayed the police but the suspects were apprehended in the end.

When questioned they explained that it was a practice of a theater workshop they attend at the university. There were no direct offenses, just some people offended at seeing people naked.

The Public Ministry will go to the University to confirm the story on Monday. Internal regulations will be considered to determine if there will be any fines given out.

The students were freed with notification of a violation.

InterNations – Networking With The Expat Community in Costa Rica