World News – Off the coast of Italy Monday, crews began the difficult task of righting the Costa Concordia. The cruise ship struck a reef and tipped over in January of last year. Thirty-two people were killed in the accident.

The engineers say they have one shot to do it right, so they are working slowly and carefully.

Slowly — almost imperceptibly — the scum line on the Costa Concordia showed she was rising from the rocky shore where she’d been stranded for 20 months.

Tilting the ship upright had been billed as the biggest, most delicate, most expensive salvage operation in history and was supposed to take all day.

Now it’s going to take all night as well. At least. 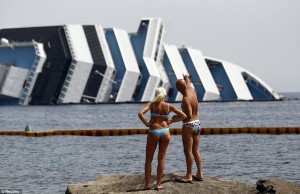 Salvage master Nicholas Sloane had to delay the start by three hours because of overnight storms.

“OK, we’re going up ten percent,” he finally said. With that command, machines began pulling on the chains running under and around the ship to try to pull it upright.

Containers welded to high-side are designed to then be filled with water, their weight needed to help settle the ship on a huge undersea platform that’s been built.

In the coming months, more containers will be attached to the other side of the ship, and they’ll all be filled with air to work like water wings to float her. That’s the plan.

But time-lapse images show the ship so far has moved just a fraction of the distance it has to go.

The ship, big though it is, is like a 950-foot-long egg, with a cracked shell. The trick has been to try to roll it over, without having it fall to bits.

“To bring the wreck in floating condition to be taken for demolition in one single piece — that was the target, the two main goals,” he said. “So far, so good.”

The accident took just a few minutes. The captain, Francesco Schettino, is still on trial for manslaughter. And they’re still trying to clean up the mess his rash decision left behind.