San Jose, Costa Rica – Ester Maria Arias Jimenez, 40, drowned yesterday while trying to rescue her eight year old.  The tragedy occurred at about 2 pm, at the mouth of the estuary in Playa Jaco, in Garabito, Puntarenas. According to the police report, the child was drowning, so that his mother set out to rescue him. However, she did not appear anymore. 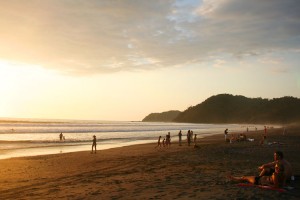 Irving Hernandez, Jaco Red Cross, said the distress call was admitted to an hour after the emergency occurred.

After several hours of searching, rescue workers found her dead.

As narrated the families of the victims, Arias and his son took the day off to swim near the mouth of the estuary.

At one point, she saw that her son was choking and rushed to his rescue. However, she did come back.

At least in delicate conditionthe boy was transferred to the local clinic. Afterwards, due to the severity of his condition, was sent to Monsignor Sanabria Hospital in Puntarenas.

The force of the sea Puntarenas yesterday also pulled a 21-year-old under, whom after his rescue, was taken to a hospital in delicate condition.

The It is the young Messiah Fabian Bonilla, who after enjoying a walk on the beach,  was swimming when he was swept away by an ocean current.

The authorities reported that, with the help of people who were close to the young man, he was successfully saved.

However, because of  the large amount of water swallowed, he was  unconscious.

Edgar Peralta, cruzrojista of the town, reported that Messiah was transferred to Monsignor Sanabria Hospital in delicate condition.