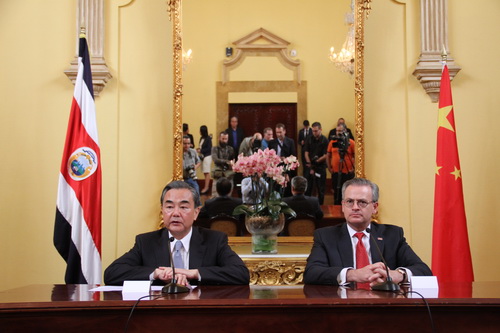 Wang Yi said that since the establishment of bilateral diplomatic relations 10 years ago, China-Costa Rica relations have maintained sound development momentum and brought the two peoples tangible benefits. Facts have proved that the decision of Costa Rica to establish diplomatic relations with China is correct and conforms to the long-term and fundamental interests of the country. Looking into the next 10 years, both countries are suggested to further expand and deepen cooperation in the following six major areas.

Secondly, trade. China and Costa Rica should explore in-depth potential of the free trade agreement between the two countries and further deepen bilateral cooperation in trade under this framework. China is ready to invite Costa Rica to participate in China International Import Expo to be held next year.

Thirdly, new energy. Both China and Costa Rica are advancing green, low-carbon and sustainable development. China has built mature industrial chains in solar energy, wind energy, clean energy vehicles and other fields and is willing to provide assistance to Costa Rica for the development of above-mentioned industries.

Fourthly, public security. The completion of the China-funded and built Costa Rica’s National Police Academy helps to boost security capacity construction of Costa Rica. China is willing to provide greater support and assistance for the Costa Rican side in safeguarding national security and stability.