Costa Rica News – I think it would be news if the Costa Rican government did something ethically and by the book.  I keep asking the question when is there going to be true accountability? If the punishment is not harsh enough crimes will keep happening within these borders.  Since when does getting a job at a government entity permit you to steal? Police……. government officials…..the list goes on and on. 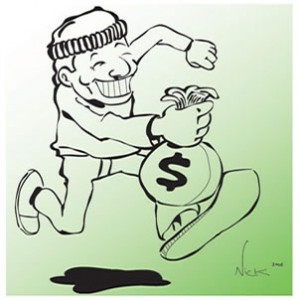 Agents of the Judicial Investigation Organization (OIJ) conducted five raids on the homes of those suspected of embezzlement.

According to the investigation, which began last week, officials were working at one of the venues of the INS in Heredia.

From their positions in the Claims Department they had access to keys called called “Powerpuff” with with which they can accept and process issues.

Apparently, the suspects used claims records policies on vehicle crashes that had already been resolved in previous years and reactivated with those keys.

As explained by the INS, they were re-openings of each of reserve policies for paying the bill later and deposited to Sinpe account.

A bank realized that one of his clients, the man named Campos, who is not working for the INS, was constantly getting deposits.

Some of the sums totaling over ¢ 4 million ($8000). The bank alerted the INS of the situation in 2011, and they then opened an internal investigation. We all know what that means. They saw a way that they also could partake in this fraud and joined in the fun before the the money flow stopped.

A week ago, the INS reported the case to the OIJ for the arrest of the five officials. Apparently, there are other accounts that also turned money.

Hypothesis…….This fraud has been going on a while on a huge level and the banks were catching on that it was not going to be stopped.  The banks were not getting any kick backs on the fraud so INS officials had to find some sacrificial lambs while their kids stayed in private schools.

I really want a government position in Costa Rica……it gives you a piggy bank of tax payers money.

The Adventure of Flying to Costa Rica

The Art of Getting Fired in Costa Rica