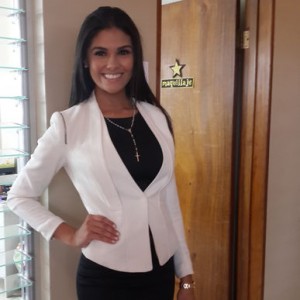 The most beautiful woman in Costa Rica came back a hero having placed in the top 16 at the Miss Universe Pageant and intoducing the world to Costa Rican culture.

She represented the country with the utmost professionalism.

Fabiana Granados, Miss Costa Rica 2013 was back at work bright and early at 8:15 am at the facilities of the Costa Rica Television Station, Channel 7, to offer an interview on Good Day.

“I’m happy with what I experienced,” said the most beautiful woman in Costa Rica.

Fabiana traveled from Russia and made a quick stop in Los Angeles before arriving in the country.

At the airport Juan Santamaría she was received by her mother, Yanory Herrera, and several relatives.

US Air-American Merger Still on Track