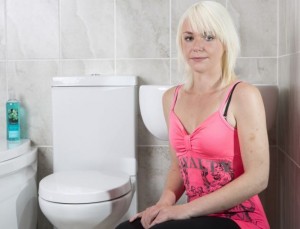 A mother-of-one is so scared of toilets she flees when one is flushed fearing she will be swallowed up after developing a phobia in childhood.

Ney Decino, 20, has an irrational fear of toilets and struggles to go to the bathroom without a family member to flush for her.

The mother-of-one’s childhood nightmare means she must work close to home so she can use the only toilet she feels safe on.

Ms Decino has been scared of using toilets since the age of four when she saw a talking toilet in 1990s Hollywood film Look Who’s Talking Too.

In the film the character, The Toilet Man, screams he wants the child’s urine while posing with big eyes, sharp fangs and a creepy voice which has stuck in Ney’s head ever since.

The carer from Church Village, Mid Glamorgan said: ‘Ever since I saw that film, I’ve been terrified. When I was about 11 I wet myself on my way home because I wouldn’t use the loo at school.

‘I was so embarrassed, I’d waited four hours but I just wouldn’t use another toilet. I just wanted my mum to be there so she could flush it for me.’

Her childhood phobia still exists today and means she will not use a public loo or a WC with an old fashioned pull chain.

If desperate she can use the toilet at a friend’s house but only if they or a family member accompanies her.

Ms Decino, who has set up a Facebook group to help fellow sufferers, admits the phobia is silly but cannot escape from the power it holds over her life.

She said: ‘It starts from the moment I enter the bathroom, there’s just a build up of tension but it goes as soon as I leave. I just flush and run. The sound of the water sends shivers down my spine. It’s awful.

‘I swear it will swallow me up. Once I’ve flushed, the sound of it and the look of the water going down, it freaks me out.’

She added: ‘I have to get out of there once it’s done and I can’t go back in for ages. I use the kitchen to wash my hands 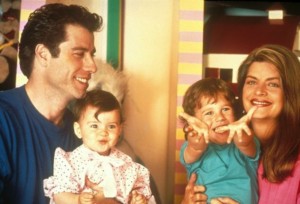 because I can’t stand being in the room when the cistern fills back up.

‘I’ve literally sprinted out the loo hundreds of times. If I’m in the house by myself I completely freak out.

The phobia also impacts her social life as she says her friends have to accompany her to the toilet when they are out in clubs.

‘Cubicles all in a row are a nightmare. That’s why I only go when out in public in an absolute emergency.

‘At school I used to go hours without going and wait until I got home, even if I was desperate.

‘It is the only loo I feel comfortable using and even then I won’t flush it if I am on my own.’

Her parents Emma, 40, and Vance, 47, videotaped Look Who’s Talking Too when she was a child because it was one of her favourite films.

She watched the film dozens of times, despite her fear of The Toilet Man.

Ms Decino said: ‘The film really triggered the fear. From about four, to the age of 13, I couldn’t flush the loo. Or if I did I had to have someone with me.

‘From that point it really got worse. I have a lot of rows with my mum and dad and they’ve got hugely frustrated with me about it.

‘Only my family, my best friend and my former partner know about it. They’ve tried to encourage me to overcome the fear but it’s never really gone away.

‘They’ve always thought I would grow out of it but I never have.

‘No one at school knew I had a problem but I was paranoid someone would find out.

‘I’d always go to the loo with a friend because girls can and no one questions it.’

Ms Decino is also fearful of water in general, avoiding swimming pools, walks next to lakes and trips to the seaside.

She gave birth to nine-month-old daughter Kaydee earlier this year and admitted her pregnancy heightened her phobia because of the number of trips to the loo she had to make.

The pregnancy made her phobia worse as she had to visit the toilet more often.

‘My mum and dad were a bit more sympathetic then but they still couldn’t believe it was the thing I was most scared of even when I was expecting.’

She say the birth of her daughter has helped as it means there is always someone with her when she flushes.

She hopes her Facebook group can help her improve and make her life easier as well as help others like herself.

Video that scared her.