Moscow (CNN) — A meteor streaked through the skies above Russia’s Urals region Friday morning before exploding with a flash and boom that shattered glass in buildings and left about 1,000 people hurt, authorities said. 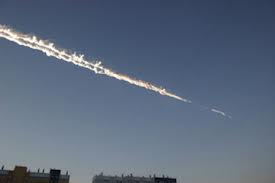 Described by NASA as a “tiny asteroid,” the meteor’s explosion created a blast in central Russia equivalent to 300,000 tons of TNT, the space agency’s officials said Friday, adding that the incident was a once-in-100-years event.

The injured included more than 200 children. Most of those hurt are in the Chelyabinsk region, though the vast majority of injuries are not thought to be serious.

About 3,000 buildings were damaged — mostly with broken glass — as a result of the shock waves caused by the blast, the state-run RIA Novosti news agency said.

Vladimir Stepanov, of the National Center for Emergency Situations at the Russian Interior Ministry, earlier told state media that hospitals, kindergartens and schools were among those affected.

The explosion occurred about 9:20 a.m. local time, as many people were out and about.

It was captured in vivid images by Russians, many of whom used dash cameras inside their vehicles.

Dash cameras are popular in Russia for several reasons including possible disputes over traffic accidents and the corrupt reputations of police in many areas. Drivers install the cameras for their own protection and to document incidents they could be caught in; on Friday, they were able to document a spectacular natural phenomenon.

CNN iReporter and Instagram user Max Chuykov saw the meteor trail from the city of Yekaterinburg. He shared on Instagram that it was “close to the ground.”

Witness Ekaterina Shlygina posted to CNN iReport and wrote on Instagram: “Upon Chelyabinsk a huge fireball has exploded. It wasn’t an aircraft.”

The national space agency, Roscosmos, said scientists believed one meteoroid had entered the atmosphere, where it 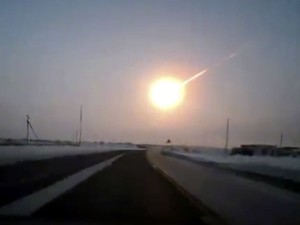 burned and disintegrated into fragments.

The resulting meteorites are believed to be scattered across three regions of Russia, one of them Chelyabinsk, as well as neighboring Kazakhstan, the news agency said.

A spokesman for the Emergency Ministry for the Chelyabinsk region told CNN earlier Friday that 524 people there were injured and 34 hospitalized.

For sky watchers, the reports bring to mind the famous Tunguska event of 1908 in remote Siberia, in which an asteroid entered the atmosphere and exploded, leveling trees over an area of 820 square miles — about two-thirds the size of Rhode Island.

About 80 million trees were felled, radiating out from the center of the blast, but no crater was left.

Friday’s Chelyabinsk meteor came on the same day that a hefty asteroid charged past Earth.

Known as 2012 DA14, the asteroid is thought to be 45 meters long, about half the length of a football field. But scientists say it came not much closer than 17,100 miles from our planet’s surface.

Officials from around the world were quick to call for greater vigilance in monitoring meteors.

“Today’s event is a strong reminder of why we need continuous efforts to survey and identify near-Earth objects,” said Thomas Reiter, European Space Agency’s Director of Human Spaceflight and Operations.

Deep Space Industries, a recently created space exploration company, said countries should be proactive in establishing “a sentry line of spacecraft circling the Earth to intercept and evaluate incoming threats.”

“The hundreds of people injured in northern Russia show it’s time to take action and no longer be passive about these threats,” said Rick Tumlinson, chairman of Deep Space Industries.

NASA spokesman Steve Cole told CNN that scientists had determined that the Russian meteor was on a very different trajectory from the larger asteroid.

“They are completely unrelated objects — it’s a strange coincidence they are happening at the same time,” said Don Yeomans, manager of the Near-Earth Object Program Office at NASA’s Jet Propulsion Laboratory.

“This kind of object does fall fairly frequently, but when they fall into the ocean or desert, there is no impact on people — so this one is unusual in the sense that it’s come over a populated area,” Yeomans said.

Cole said he wasn’t aware whether scientists had foreseen the meteor’s entry into the atmosphere.

Because meteoroids are small, they are hard to spot and there is often little warning that they are heading toward Earth, he said.