Costa Rica News – A couple of months back the Costa Rican Times was lucky enough to make the acquaintance of Melanie Edwards during her brief stint in the country.  On her journey through the rain forests and beaches of Costa Rica Melanie pieced together her new album. 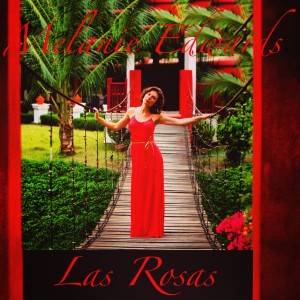 Her sixth record “Las Rosas” is from Costa Rica and will be released on May 21st.  Having spent February and March writing and recording in San Ramon, she layers ambient sounds of rain, waterfalls, birds and insects from her travels to Tortuguero, cloud forest mountains, Guanacaste and Nicoya.

NYC-based musical scientist, Melanie Edwards, commands the attention of her listeners, captivating them with her haunting vocals, intricate compositions and songbird melodies. Classically trained in piano, violin and voice since the early age of nine, Edwards’s collection of songs showcases an authentic, dynamic musical concoction that reminds listeners what real talent sounds like.

We sat down with Melanie and asked her some questions about her music and her upcoming album.

1. I am always interested in how someone decides to pursue a career in music and performing…..tell us a little bit about your background and what led you to that decision? Also is music your only passion, what else resonates in your heart?

Music was the first medium available to me at an early age. We had a piano in the house and my family was extremely musical. I sang before I spoke and have always felt honest expressing myself as a songstress. I never really pursued it as much as it pursued me. We chased each other and once found, it was better than sex or booze – which I guess can be dangerous. Playing music is very different than composing and songwriting, so the whole formula resonates, because I love the process: the channeling, the projection, the engineering and designing this sonic architecture. When I’m songwriting, I’ll carry the recorder around with me everywhere, because all thought tangents are possibilities. In fact, one of my new songs on the album “Two Weeks” was recorded off the cusp, without rehearsing or writing it on a notepad. Honestly, I just pressed record.

2. How would you as the artist describe your music fro someone that has never heard it?

Others have described my melodies as haunting and intricate. I enjoy writing in the minor as opposed to major chords. Melancholy dances with piano and violin. We’re all very good friends.

3. You just spent some time in Costa Rica producing your new album and playing around the country, tell us about your experiences here in Costa Rica?

Costa Rica is a spiraling ball of kinetic, magnetic, honey icecream making it’s way down into the pit of your stomach on 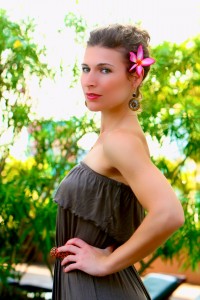 the gloomiest of days. The concept of Pura Vida is hard to shake; it’s the antithesis of NYC. I lived with the most beautiful, welcoming family in San Ramon and fortunately, speak Spanish, so was able to really connect. Something interesting happened during my time there. Roses kept showing themselves in ways I couldn’t literally translate. I embraced them as these physical realm messages from a muse. They were on curtains, bowls, one even grew out of a dormant tree, without a rose bush in sight. My Lab Producers and I co-collaborated on the artwork, and named the album “Las Rosas” because of their constant presence.

4. Tell Us about your new album and how it ties into Costa Rica? What do you want people to feel when hearing the album?

I wrote and recorded the songs in San Ramon, during February and March. I also logged early morning hours of ambient sounds from birds, insects, waterfalls and rain storms, during my travels through Tortuguero, the cloud forest mountains, Nicoya and Guanacaste. I’ll interweave this natural soundtrack into the pieces, so when people listen back, they’ll hear actual congo choir or tree frog calls. I want the Costa Rican nature to be as much a part of the album as my own compositions and for the audience to feel like they’ve experienced this journey with me, the way my Lab Producers did.

5. What is the next step for you Melanie? Where do you see your future both personally and professionally?

As a global musical scientist, I’ve been traveling and touring the last five years. I’m having a fascinating time, meeting new fans and spreading the work. It’s challenging putting my songs through these unique countries and filters, because each land has it’s own shade, gloss and energy. I don’t do a lot of planning for the future or try to calculate intangibles, because my inner compass relies on instinct. I’m in surrender mode now; pushing and pulling just makes you tired. I’d like to make an album in space. Maybe that’s next for me.

Thanks for your time Melanie and we wish you the best of luck with the release of your new album and the journey of life that you are on.  I am ready to buy your space album.

If you are interested in purchasing Melanie’s new album “Las Rosas” with sounds from Costa Rica  please go to her site at http://www.melanieedwardslabs.com/.