Costa Rica Sports – The Archery World Cup stage in Medellin, Colombia is an opportunity to see teams not often spotted at international competition outside of the American continent. 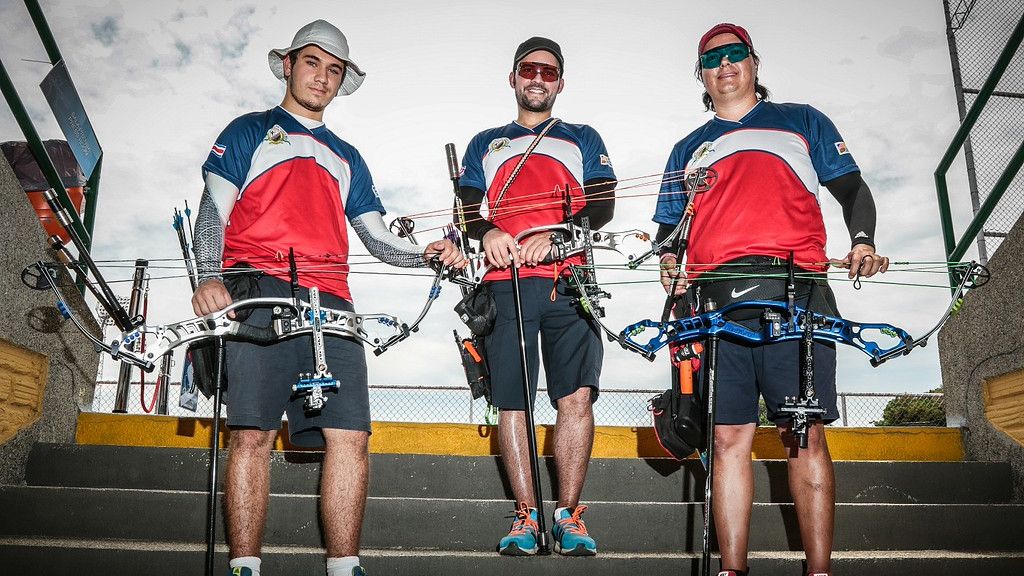 The Latin American country of Costa Rica is one such of those teams.

Oscar Acuna, Jose Maria Gamboa and Gustavo Ruiz travelled to Medellin to represent the nation at the fourth and final stage of the 2015 Archery World Cup circuit.

Medellin is a city they say they like, and associate with both challenges and progression. Oscar and Gustavo have never missed a World Cup competition in the city of eternal spring – since it all started back in 2013. While for Jose Maria, the youngest of the trio, 2015 marked his second trip to Medellin, after competing at the event in 2014.

In 2013, Oscar and Gustavo finished ninth with their team and 33rd individually (losing in the second round) – while one year later, all three had the same results. They’re back in 2015, and with an eye on improving thanks to slowly-amounting international competition experience, which includes appearances at the Americas at the Central American and Caribbean Games and the Pan American Championships in Rosario.

We spoke to them during official practice at Medellin 2015. Read on and meet the team…

Gustavo Ruiz: “Medellin has always been a good host of the Archery World Cup. The weather is nice and people are always kind, always smiling – but for us, it’s the just the perfect location as it’s easier to come to Medellin than traveling to Europe. We always want to come back.”

WHAT CAN YOU TELL US ABOUT ARCHERY IN COSTA RICA?

Oscar Acuna: “Archery in Costa Rica has been practised for many years now – but not by many people, though. It is difficult to live from sports in our country, so we do this because we like it, for the passion – a feeling that is shared by many other archers.”

“We’re still in the process of getting sponsors and support from the government and local entities, as we want to gain more international experience.”

“This is what we love and we will fight for better opportunities in the sport, for us and for the generations to come.”

HOW DO YOU TRAIN FOR INTERNATIONAL COMPETITIONS?

GR: “We have a national tournament every month. There, we have the chance to compete, to get more experience and keep the feeling of competitiveness.”

“I get to train two hours per day, usually, before going to work. I know it’s not much, but I’m very dedicated and try to practice the best I possibly can.”

OA: “I also train two hours per day before going to work. Sometimes I worry a lot about the time but you know, I enjoy doing it so much that I don’t even care about waking up early in the morning to go out and shoot.”

Jose Maria Gamboa: “I’m not able to train every day. I practise four days per week, for between three and four hours per training session.”

WHAT DOES IT FEEL TO BE THE YOUNGEST ON THE TEAM?

JMG: “I might be the youngest but I have been shooting for two more years than them – [laughs] – Oscar and Gustavo started shooting four years ago.”

“I’m just proud to be part of it. I feel the age difference on the field, but it’s great to shoot with them, compete with them and get better with them. We have a great on- and off-the-field relationship.”

WHAT ARE YOUR EXPECTATIONS FOR MEDELLIN?

GR: “Improve my personal best and finish in better positions.”

JMG: “Improve my personal best and, probably, making it to the last-32 round.”

By ANDREA VASQUEZ, From World Archery

Where Will the Artisans Go From Downtown San Jose?