World News – Now we will go through the cycle again….. prayers are with you……lets push gun control laws….nothing happens…..next shooting.

Twelve people including a police officer were killed by a gunman at a crowded bar in Thousand Oaks, California, late Wednesday, officials said.

Several hundred people were inside the venue, which was hosting a “college country night” for students, police said. Ventura County Sheriff Geoff Dean described the incident at the Borderline Bar and Grill as a “tragic, tragic situation.” 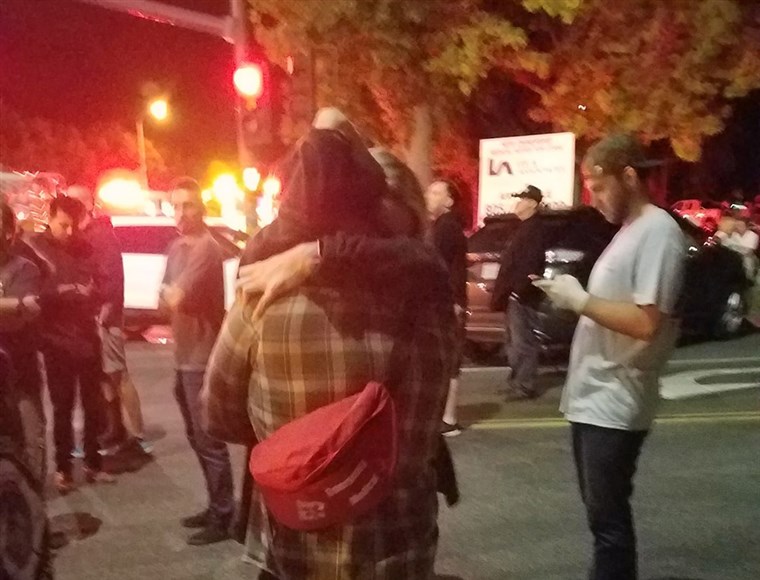 Authorities confirmed that the shooter had been killed and Dean said it was too early to determine whether there was any link to terrorism.

Law enforcement officials say they have a tentative identification, but they’re not yet revealing the name. The gunman is a white male, born in 1990 who is heavily tattooed, the officials said.

Dean said on “Today” that that investigators were seeking to identify him using fingerprints and tattoos.

The identification process has been slower than normal, because the gunman, armed with a single handgun, was apparently not carrying a drivers license or any other form of ID.

The police officer killed was named as Sgt. Ron Helus, a 29-year police veteran with a wife and son who was looking to retire in the next year.

“He was hard-working, he was totally committed, he gave his all and, tonight, as I told his wife, he died a hero,” an emotional Dean said. “He gave his life to save other people.”

Helus arrived at the scene alongside a colleague from the California Highway Patrol within three minutes of reports of shots being fired at around 11:20 p.m. (2:20 a.m. ET Thursday), according to Dean.

After hearing more gunfire, Helus and the Highway Patrol officer entered the building and Helus “was struck multiple times with gunfire,” according to Dean.

The other officer went back into the building and dragged Helus out of the line of fire, but he died in the hospital hours later, the sheriff said.

A SWAT team, FBI and others officers arrived soon after. When they entered the building they found 11 people dead.

A single shooter was also found killed by a gunshot wound, Dean said, adding that it was unclear exactly who had killed the suspect. “We don’t know who shot anybody at this point,” he said.

Between 10 and 12 people suffered injuries of varying severity, others with more minor wounds escaping and taking themselves to the hospital, Dean added. Pepperdine University, in nearby Malibu, said it believed some of its students were at the bar. It said it was working “to identify and provide support to those students.”

Located around 40 miles west of Los Angeles, Thousand Oaks was recently ranked as one of the country’s safest cities.

John Hedge told NBC News he and his stepdad were in the bar and were forced to take cover when the shooting started.

“I was actually about to leave when you start hearing pop, pop, pop. It sounded like fireworks or something,” he said. “My stepdad dove and took cover and yelled at me, ‘John, hit the deck! Hide!’ So I get down. And the gunman started opening fire on the cashiers, the people working the cash register on the front desk.”

ayla Simmons said she was inside the bar when shots were fired directly behind her. Bullets continued as she managed to escape outside into the parking lot.

“I saw the shots go off, although I didn’t really see the guy,” she said. “I knew something was wrong straight away. I just wanted to get down as soon as I heard the first shot go off.”

Hours after the shooting stopped, friends and family members gathered at the nearby Goebel Senior Center and waited anxiously for news.

Among them was Ken Dunham, whose son Jake, 21, was in the bar and remains missing.

“I keep calling it but there’s no answer,” he told NBC Los Angeles. “It just keeps ringing out. And he always answers his phone.”

He said he was alerted to the shooting by his son’s friends who raced to the house and banged on his door.

One college student who said he was a regular at the Borderline told the channel he had at least 10 friends inside.

“No one’s gotten back to me,” he said on camera without giving his name. “I’d like to hope for the best, but I have no idea.”

The venue opened in 1993 and describes itself as a “haven for country line dancing folks of all ages.” It says it’s hosted many famous acts including The Beach Boys.

Thousand Oaks was ranked the third-safest city in the United States this year, according to the data analysis website Niche.

It is the 307th mass shooting in the United States this year, according to the Gun Violence Archive.