Costa Rica News -If anyone has a craving for culture and music in Costa Rica,  pianist Manuel Matarrita will give a recital on Wednesday August 29th which he entitled From My Country. The recital will be at the National Theatre, at 8 pm. The concert is dedicated exclusively to Costa Rican composers, that use to compose thinking about the piano. 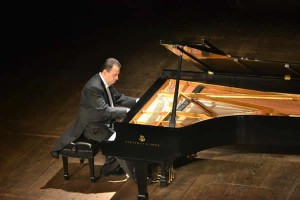 Those attending the presentation made a trip through different periods of musical history Rican, beginning with works that were created in the nineteenth century and ending with world premieres. Some of the works are interpreted: Prelude and Fugue on Candy Cane , Allen Torres, and Leda , Julio Fonseca.

“The goal is basically to present the music of  Costa Rican composers, because most of the works are not known,” said Matarrita.

During the concert at the historic theater will perform works by Alejandro Monestel, Julio Fonseca and Marvin Camacho, among others.

Matarrita is a pianist and teacher with extensive activity both inside and outside the country. This year we conducted a series of three concerts in the United States , while in 2011 was made in countries like Peru, El Salvador and the United States.