World News – I hate to be cold and make light about the death of a man trying to dribble a soccer ball 10,000 miles to Brazil, but this is exactly why our parents told us not to play in the street. 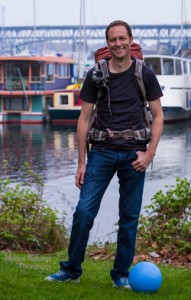 A Seattle man trying to dribble a soccer ball 10,000 miles to Brazil in time for the 2014 World Cup died Tuesday after being hit by a pickup truck on the Oregon Coast.

Police in Lincoln City, Ore., said 42-year-old Richard Swanson was hit at about 10 a.m. walking south along U.S. Highway 101 near the city limits. He was declared dead at a local hospital. The driver has not been charged.

Swanson set out on the trek to promote the One World Futbol Project, based in Berkeley, Calif., which donates durable soccer balls to people in developing countries. The company did not immediately respond to a call for comment.

In an interview with The Daily News newspaper in Longview, Wash., Swanson said he was a private investigator looking for an adventure while between jobs. An avid runner, he picked up soccer just five years ago and played on club teams and rooted for the Seattle Sounders.

“I felt destined that I should go on this trip,” he said.

His website said he left Seattle May 1, and the trip would take him through 11 countries before reaching Sao Paolo, Brazil, where the World Cup soccer tournament will be played.

” It will be a trip of a lifetime where I will push myself further than I ever thought possible,” he wrote.