Lying Is As American As Apple Pie

Trump choppered in for a photo-op in the ashes of Paradise. He stood in the ruins, hands on hips and fidgeting with his cufflinks like the pea/cock he is, blathering heartlessly about how “hopefully this is going to be the last of these, because this is a really bad one.”

You could see how pained Governor Jerry Brown was to stand next to Trump in the ashes and ruins of the town, but the president holds the purse strings, and Brown felt he had no choice but to be there.

I tried to activate activist friends in Chico to show that the people directly affected by this still unfolding tragedy didn’t want Trump here. But activists here were unable to act, a depressing example of “the only thing necessary for the triumph of evil is for good men and women to do nothing.”

The word in Chico is that Trump was coming to the site of the most devastating wildfire in American history to throw plastic spray bottles at survivors, in keeping with his empathic gesture of throwing paper towels at survivors of Hurricane Maria in Puerto Rico. 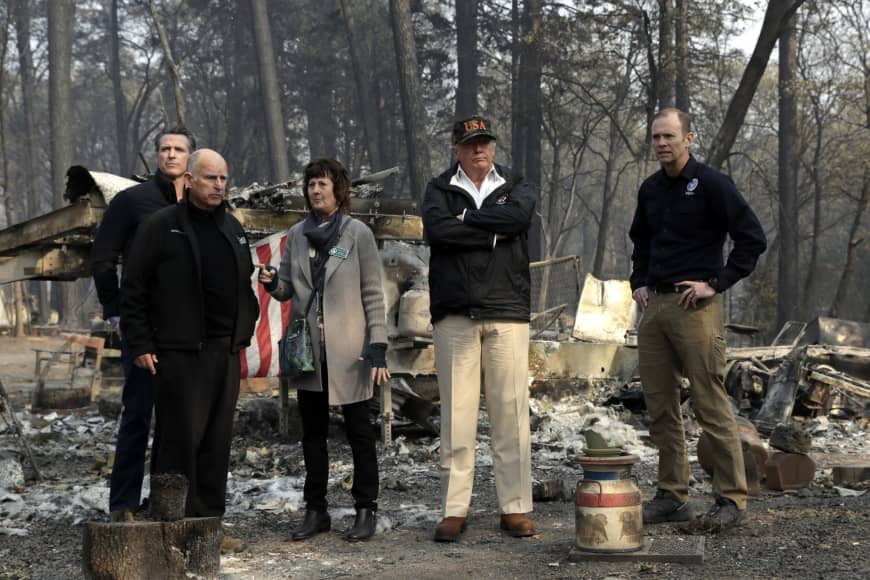 This president is a grievously stunted man, a man incapable of empathy and human feeling, a president who could no more fulfill the role of consoler in chief than he can Commander-in-Chief. He’s a disgrace to America, and there aren’t a 100 people in northern California that wanted to see or hear his ugly mouth here.

The death toll has risen by single digits every day, up to 79 now, but may well end up in the hundreds. The number of missing has risen to 1200 in recent days. Adjusted for deflation of the human character, this horrific event may approach the San Francisco Earthquake in scale and shock.

There are almost as many forms of lying, as there are liars. America has perfected them all. No wonder we’re in such a world of shit.

One form, which we’re presently enduring in Butte County after the wildfire destroyed the formerly idyllic community of Paradise, is what I call the ‘dribbling lie.’

It took root after America’a egregious invasion of Iraq under Bush Junior, and works by releasing the numbers of deaths in increments, so that the public is conditioned (read numbed out) by the time the full facts come out.

In the midst and immediately after the fire swept through Paradise, the authorities were honest and efficient. But in recent days they’ve slid into cover-your-ass mode, dribbling out the numbers of deaths, and erring in the side of the status quo even as the number of missing skyrockets. 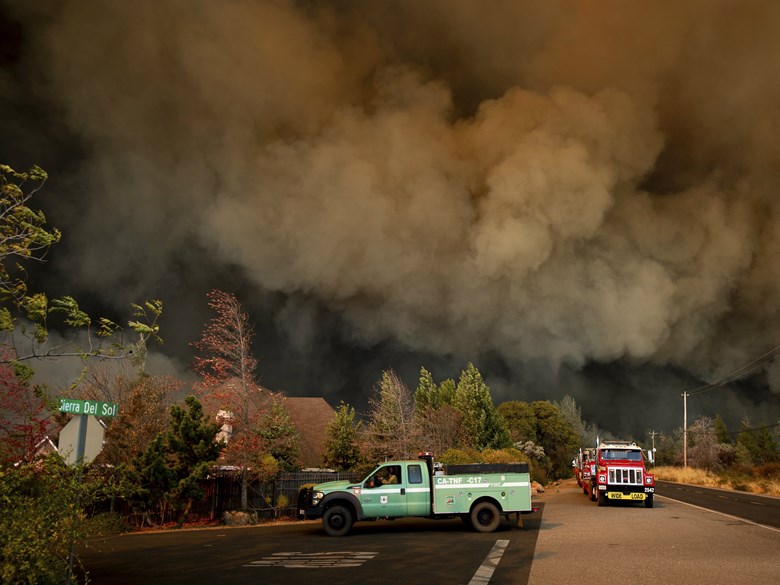 So conditioned are we to this paternalistic mode of lying are we that even burned out residents of Paradise acquiesce to it: “We’re not being told everything until we can handle it.” Just what does that mean, and why is it necessary to treat the people like children?

The Sheriff-Coroner of Butte County (that’s his official title), Kory L. Honea, said it’s “certainly within the realm of possibility that we will never know” the exact number of people killed in the blaze.”

This follows a pattern that began the day after the fire swept through Paradise. For two or three days, Honea and the authorities wouldn’t comment on how many died at all. They first said 5, the next day 9. Two days later is was 22, then 29 and so on in a drumbeat of escalating figures meant to ease the shock but actually increasing the suffering and numbness.

As Trump’s motorcade sped by, one eloquent survivor, her home gone, stood on the Skyway with a sign: “Trump, we don’t need criticism, we need compassion.”

A small clutch of pathetic Trumpians, waving flags and tooting horns, shouted huzzahs nearby. Where were Chico’s activists? Friends admitted they were too busy feeling good by “helping the needy.” “All that evil needs to prevail…”

As a friend in Iowa said, “there is no bottom to darkness/evil.” But somewhat contradictorily, he also said, “If forces of darkness are allowed to wreak havoc with impunity, then darkness will inevitably get deeper and deeper.”

Darkness/evil is man-made, and therefore it can be faced (first within) and stopped by human beings. Trump and most of his supporters are too far gone. And though my fellow Chicoans were a deep disappointment, it isn’t too late to prevent evil from prevailing.

However we have to face the fact that lying goes a lot deeper than the willing scapegoat Donald Trump. It’s as American as apple pie. Let’s stop buying and biting into it.