Living in Costa Rica Stories: We Have Gringos for That

We Have Gringos for That 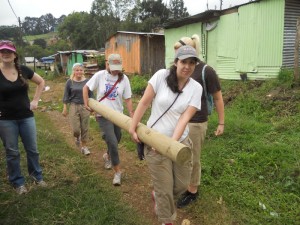 As we got closer and closer to the holidays I have received various emails from gringos that are interested in being involved with charities or community service projects when they came down to Costa Rica for their Christmas vacations.  As I did more and more research on projects to be involved in as well as community service projects in general they are pretty much all run and organized by non-Costa Ricans.  I know I will get some angry ticos saying they have projects and there are a few but 90% of them are foreign founded and operated.

I know most Costa Ricans are going to say that they have Teleton during Christmas to help raise money for the Children’s Hospital, but if you have ever watched that it is a bunch of self centered people that are there to help promote themselves and get publicity.  If a Costa Rican does not get something directly in return in most cases they are int interested in being a part of it. There are exceptions to this but like the movie He’s Just not That Into You, it is the not the rule, it is the exception.

As I prepared The Costa Rican Times to be able to help support the Orphanage I knew I needed to get the local Costa Ricans involved for it to have traction.  I contacted acquaintance of mine on facebook that works from Chanel 7 and a local radio station to see if she could help in anyway but after she found out there was nothing in it for her other than helping the kids she declined in the typical Costa Rican fashion, ignoring all forms of contact.

I also contacted Aerocasillas to try to help with being able to get shipments of good from the USA down to Costa Rica for the kids.  I had 6 to 7 people line up in the USA that wanted to send medical supplies and again after they got the proposal which included free advertising on the newspaper they declined to help. I also asked if they did not want to help  to please give me info on shipping for charities in Costa Rica.  Their response “We are not interested”, nothing more.

After these instances and a few others I decided that the only way I would be able to pull off the Christmas part for the kids was to do everything myself and involve gringos.  I would hear empty promise after empty promise when it came to Costa Ricans saying they would be involved. I did finally get a Jaco model to get a guy that said he would paint faces at the Christmas party and that she had friends that would bring presents.  I really hope this happens and think that if a Tico guy promises a beautiful girl to do something he usually will.

The biggest conundrum in Costa Rica is that for ongoing  community projects to succeed you need the involvement of the local community.  In order to get the involvement of the local community you need to have Costa Ricans running the project.  However, once you put Costa Ricans in charge then in most cases it generates some buzz for about a week or two and then is forgotten about.  It is a circle that fails almost every time.  In order to get local Costa Ricans involved in a community service project you usually have to bribe them to get them there.  (Free Food, Free Beer, Free Publicity, Money or Something Else) It is sad but it is true.

Costa Ricans are in most cases living by the motto “We have gringos for that.” When running a business in the USA if I had an employee that did not do what was assigned to them they were let go.  In Costa Rica for the most part if a Costa Rican does not do anything someone will do it for them which promotes laziness in the society here.

What is going to happen as more and more gringos start to leave as the Costa Rica government makes it more and more inconvenient for foreigners to live here?