Limon, Costa Rica –  As stubborn as the rain fell on this city for most of the day, the dock workers remained paralyzed Moin and Aleman ports.  Seven vessels remained in harbor waiting to load or unload goods. Each day it is delayed it costs up to $ 40,000. 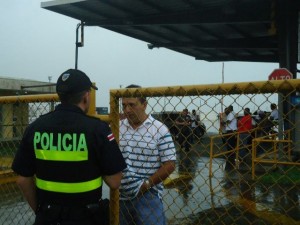 Limon does 80% of exports and imports in the country. Leaders Japdeva Workers Union, Port Associations (Sintrajap) warned that the pressure will increase on Wednesday if the government does not sit and talk.

His most important claim is against the concession to the Dutch company APM Terminals to build a container terminal in Moin. The contract was even endorsed by the Comptroller General of the Republic.

The demand is the annulment of Chapter 9 of the contract with APM, which gives them the exclusive container movement.

The protest began in the Caribbean has been joined by porters, bus drivers and workers teachers Costa Rican Electricity Institute (ICE) take or announce action against the Government.

For the Minister of the Presidency, Carlos Ricardo Benavides, industrial action “unjustified”, charging they have months of dialogue with the dockworkers.

Also their are voices being raised by representatives of chambers of exporters and importers, concerned about the losses that represents the arrest of port activity.

One thing that these workers are not seeing is the fact that APM hs be contracted to improve the port and this is going to increase jobs and the amount of work that is available for these union workers.  Typical Costa Ricans not being able to see the future past today.