World News – When are these government officials going to be held to their word? When is telling the truth going to be required for the people running the nations of the world? There wide spread lies and governmental corruption has got to end! 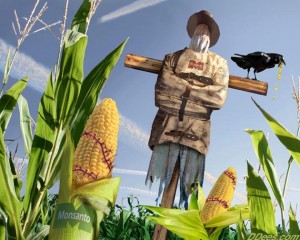 United States President Barack Obama has signed a bill into law that was written in part by the very billion-dollar corporation that will benefit directly from the legislation.

On Tuesday, Pres. Obama inked his name to H.R. 933, a continuing resolution spending bill approved in Congress days earlier. Buried 78 pages within the bill exists a provision that grossly protects biotech corporations such as the California-based Monsanto Company from litigation.

With the president’s signature, agriculture giants that deal with genetically modified organisms (GMOs) and genetically engineered (GE) seeds are given the go-ahead to continue to plant and sell man-made crops, even as questions remain largely unanswered about the health risks these types of products pose to consumers.

In light of approval from the House and Senate, more than 250,000 people signed a petition asking the president to veto the spending bill over the biotech rider tacked on, an item that has since been widely referred to as the “Monsanto Protection Act.”

“But Obama ignored [the petition],” IB Times’ Connor Sheets writes, “instead choosing to sign a bill that effectively bars federal courts from being able to halt the sale or planting of GMO or GE crops and seeds, no matter what health consequences from the consumption of these products may come to light in the future.”

James Brumley, a reporter for Investor Place, explains a little more thoroughly just how dangerous the rider is now that 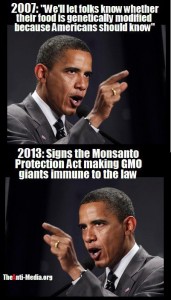 biotech companies are allowed to bypass judicial scrutiny. Up until it was signed, he writes, “the USDA [US Department of Agriculture] oversaw and approved (or denied) the testing of genetically modified seeds, while the federal courts retained the authority to halt the testing or sale of these plants if it felt that public health was being jeopardized. With HR 933 now a law, however, the court system no longer has the right to step in and protect the consumer.”

If the president’s signature isn’t all that surprising, though, consider the genesis of the bill itself. According to an article published Monday in the New York Daily News, US Sen. Roy Blunt (R-Missouri) “worked with Monsanto to craft the language in the bill.”

One year could be all it takes to cause catastrophic damage to the environment by allowing laboratory-produced organisms to be planted into the earth without oversight. Under the Monsanto Protection Act, health concerns that arise in the immediate future involving the planting of GMO crops won’t be able to be heard by a judge.

What part of this bill is good for the people? That’s right none of it! Obamacare is a failed plan and has increased costs. This entire presidency has been a plan to give more and more power to government, and the Obama supporters still think he is the second coming……when does it end?

Obama supporters will keep supporting him no matter what he does. Let’s see what happens when Obama comes to Costa Rica and 2 corrupt governments join forces.

You know this bill is bad when The Washington Post cannot even spin this in Obama’s favor.

This article should have included the fact that the bill is a temporary measure which expires at the end of September this year. It protects cash investments of farmers in the meantime.