A body discovered by workmen in a car park in Leicester, England last September, turns out to be that of the last Plantagenet monarch, King Richard III. The skeleton was unearthed during excavations for a new building project. 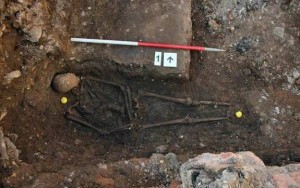 Richard III died in the Battle of Bosworth Field in 1485 after only two years on the throne. The skeleton had wounds that were consistent with sword blows and the location of the body was close to the site of a former church, thought to be where he was buried. A strong piece of evidence was the curvature of the spine, which was a long known characteristic of this infamous king, but it took DNA evidence to confirm his identity. Historians and genealogists managed to trace a direct descendant of Richard III’s sister. They had some luck on their side, because this certain type of DNA called mitochondrial DNA is carried only in the female line and the last descendant has no children, so the line is about to end.

Until now Richard III has not enjoyed a reputation as a good king. Variously portrayed by Shakespeare and later Hollywood as an evil scheming hunchback, Richard was thought to be involved in one of the most famous double murders in English history. His brother, Edward IV, had two boys who were his natural heirs. Edward entrusted Richard as Lord Protector of the older boy, destined to become Edward V. However, when Edward IV died in 1483, before the young Edward V could be crowned, Richard assumed the reigns of power and the two little princes were imprisoned in the Tower of London and conveniently disappeared, thought to have been murdered by their uncle.

He was challenged for the throne by Henry Tudor who defeated him, ending the Wars of the Roses and becoming Henry VII. Richard’s mutilated body was given a cursory battlefield burial and the grave was lost for five centuries until last year. He was the last King of England to die in battle and his death is said to mark the end of the middle ages. For all his dubious reputation, Richard III is credited with introducing social reforms allowing poor people representation and improving the economic life of commoners. He also introduced ‘bail’ into the legal system, preventing the imprisonment and seizing of a person’s goods before trial- Richard was a true people’s champion.