Robert F. Kennedy Jr. is convinced that a lone gunman wasn’t solely responsible for the assassination of his uncle, President John F. Kennedy, and said his father believed the Warren Commission report was a “shoddy piece of craftsmanship.” 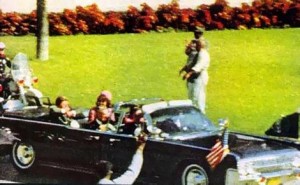 Kennedy and his sister, Rory, were interviewed by Charlie Rose on Friday night in front of an audience in Dallas as a year of observances begins for the 50th anniversary of the president’s death.

Their uncle was killed on Nov. 22, 1963. Five years later, their father was assassinated in a Los Angeles hotel during his primary victory celebration.

Robert Kennedy said his father spent a year trying to come to grips with his brother’s death. He said his read writings by Greek philosophers, Catholic scholars, poets and Henry David Thoreau “trying to figure out kind of the existential implications of why a just God would allow injustice to happen of the magnitude he was seeing.”

He said his father believed the Warren Commission, which concluded Lee Harvey Oswald acted alone in killing the president, was a “shoddy piece of craftsmanship.” He said that he, too, questioned the report.

“The evidence at this point is convincing that it wasn’t a lone gunman,” he said, but he didn’t say what he believed may have happened.

The attorney and well-known environmentalist also told the audience light-hearted stories Friday about memories of his uncle.

As a young child with an interest in the environment, he recalled, he made an appointment with his uncle to speak with him in the Oval Office about pollution.

He’d even caught a salamander to present to the president, which unfortunately died before the meeting.

“He kept saying to me, `It doesn’t look well,'” Robert Kennedy recalled.