World News – A “jellyfish bloom” may sound pretty, but it can get ugly fast. A swarm of moon jellyfish from the Baltic Sea were sucked into the cooling pipes of a nuclear power plant on the Swedish coast last week, shutting down one of the three units for four days. 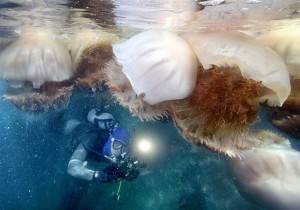 In 2008, another such “bloom,” glowing purple, wiped out an entire farm of salmon in Northern Ireland by stinging and suffocating the 100,000-strong school to death. Every summer, since the early 2000s, fishermen in Japan brace for swarms of Nomura jellyfish, tentacled monsters the size of a Smart Car. In Israel, where jellyfish routinely clog plumbing in power plants, some companies have set up designated summer jelly-watch squads.

And guess what? This jellypocalypse is our fault.

“There are systems in which jellyfish have increased,” said Mark Gibbons, a researcher at the University of the Western Cape in South Africa — who has spent decades studying the ecosystem off the western coast of Africa — “and that can be clearly attributed to our influence.”

About 30 years ago, when overfishing cleared the sardine population off the coast of Namibia, Gibbons said, jellyfish rose to take their spot. Fisherfolk complained noisily about the heavy blobs which would clog their nets, and decrease the value of their fish by stinging them. These days, jellyfish numbers have stabilized, he told NBC News, but it’s settled at a level that’s higher than it was three decades ago.

In the Mediterranean, the opening of the Suez Canal let in the “nomadic jellyfish” from the Indian Ocean via the Red Sea, and they’ve taken over, Stephano Piraino, a jellyfish researcher at the Università del Salento in Italy, told NBC News.

These nomads were first spotted on the Turkish coasts, then off Greece, near Malta in 2006 and 2007. Now, Piraino said, they’ve gotten as far as the Tunisia coast, in the central Mediterranean. They’re thriving in the colder waters either because the waters are warmer than before — a potential factor of global climate change — or because they’ve adapted their life cycles. Along with 600 other species which crossed the Suez, the jellies are driving the native marine dwellers to extinction and taking their place.

The Adriatic Sea is the one place that researchers have been keeping an active jelly-watch for over two and a half centuries. Looking back to the first recorded sightings in 1729, history indicates that jellyfish “bloom” cycles are increasing in frequency, and lasting longer. The extensive local data set has shown Alenka Malej, a jellyfish researcher at the National Institute of Biology in Slovenia, that cyclical jellyfish “blooms” have been flourishing with increasing regularity in the last few years, and are sticking around for longer as well.

Why The Boom?
“It’s very clear that jellyfish populations go up and down naturally with climate,” Jennifer Purcell, a jellyfish 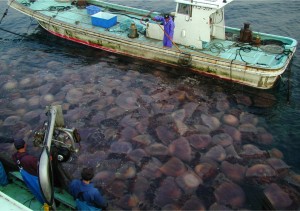 researcher at the Western Washington University told NBC News. But recent human-caused warming has, along with other factors, created “suspiciously” fit conditions for jellyfish.

Most recently, teams have found that undersea construction, has also been very very good to the bloomin’ jellies.

A jellyfish doesn’t start out adrift and on the hunt. Most of its life is spent anchored, as a millimeter-high translucent polyp. A polyp can hang out for years, and bud off multiple bententacled baby jellies which swell to full size in their single year abroad.

Malej led a study that tested if jellyfish polyps in the Adriatic Sea were using offshore platforms like oil or gas rigs and harbors as nesting grounds. Compared to the 1960s, when there were only a handful of platforms in that body of water just beyond the “boot” of Italy, there are now more than 120. Sure enough, Malej told NBC News that her team found moon jelly polyps encrusting every base they sampled.

It’s not just those fossil-fuel rigs, either. The sandy bases of offshore windmills make sound breeding grounds for Mediterranean jellyfish, says Piraino, whose newest study looked at the jellyfish-friendly bases of windmills in the North Sea as well.

A Chewy Problem
As human activities in the oceans continue, our run-ins with jellyfish are expected to become more frequent. Researchers expect to see them to be the cause of seasonal beach closings more often, or becoming more of a nuisance at coastal power plants.

What’s the solution? Robots, say one a team from the Korean Advanced Institute of Science and Technology. They’ve built a “Jellyfish Elimination Robotic Swarm” to travel the ocean and shred any jellyfish that get in the way, capable of mulching 1,985 pounds per hour.

Jellyfish-juicing robots “may not be the best solution” on an ocean-wide scale, but “a power-intake plant might be a good place to try it,” Western Washington University’s Purcell said.

Another solution may be to eat our way through them. At Piraino’s lab in Italy, researchers are looking at how to make jellyfish more palatable: to livestock — and to humans. “[Jellyfish] have a low proportion of fat and a high proportion of proteins,” he told NBC News.

If you visit China, Korea or Japan — or even restaurants in America featuring those cuisines — you shouldn’t be surprised to find them on the menu. People in the Far East have been eating jellies for millennia, served in various degrees of crispiness, after being harvested, dried and salted.

“There’s not much flavor at all, but it’s more about the texture,” Lucas Brotz, who is researching jellyfish fisheries towards a PhD at the University of British Columbia, told NBC News. “It’s this interesting line between crunchy and chewy, like al dente pasta, sort of half cooked.”

While Brotz believes that one solution to jellyfish over-population is that we eat more of them, there’s a problem: The populations experiencing the biggest rise are not among varieties that people typically do eat. “We may develop technology to make them more palatable,” he offered hopefully.