Costa Rica News – Jay-Z had a good reason to be a no-show at the American Music Awards. 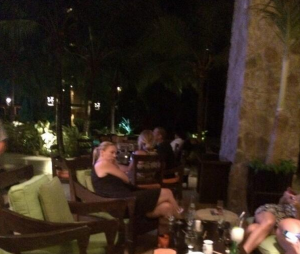 Yes, his protégé, Rihanna, received the first ever Icon Award, but family… and a little fun in the sun… comes first.

While Jay-Z was giving a heartfelt video message to the “Diamonds” singer in L.A., he was spotted with Beyonce in Costa Rica on Sunday night by some fellow diners.

We know what you’re thinking, the back of Bey’s head is not her best angle, but what’s a fan to do when trying to get an undercover snap? Improvise.

The pic has been making the rounds among the local press where the buzz of their first-ever visit has been growing since the weekend.

The Directorate of Immigration confirmed Beyonce Giselle Knowles-Carter and Shawn Corey Carter entered the Central American country on Saturday night at 10:19 p.m. via private jet in the capital of Liberia, Guanacaste (because when you’re Forbes‘ richest celeb couple, there’s just no other way to fly.)

And apparently, it was just a romantic holiday for two. The dynamic duo arrived without their nearly 2-year-old baby girl, Blue Ivy Carter, in tow, according to immigration.

It seems the jetsetters needed some down time before they resume their busy superstar schedules. The “Diva” singer continues her Mrs. Carter Show world tour Nov. 30 in Vancouver, Canada, the same day her music mogul hubby is due in Minnesota for a presentation at the Xcel Energy Center.