Weird News – Well this would be regulated and then owner would be fired from the Costa Rican government if this came into effect during Laura Chinchilla’s reign in Costa Rica.  This bar is guaranteed to get a lot of buzz . . . if only for the battery-operated sex toys. 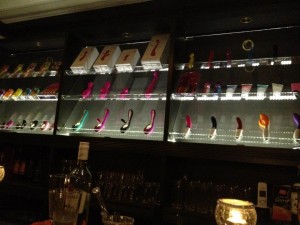 Love Joule, a colorful new bar in the Shibuya district Tokyo, is the first “love and sex bar dedicated to women,” according to the Tokyo Reporter. What does this mean, exactly? Proprietor Megumi Nakagawa minces few words.

It’s hard to imagine not talking about the bar’s unique theme. Behind the counter, where rows of liquor bottles would normally stand, are colorful display cases filled with dozens and dozens of different types of vibrators.

The spot is already a hit with women in the commercial sex and burgeoning adult film industry, according to its Facebook page, which sites former adult video star Nayuka Mine and model Sayo Hayakawa as customers.

Akiko Teishi, a reporter for blog Bikyamasr.com, visited the bar recently and spoke to some of its patrons.

“I go because it is a safe place and I don’t have to worry about trying to brush off men all the time,” said a customer going by the name Sayama. “Add in that it is also a great place to drink and talk about what we women love to talk about, sex and guys, that’s also a big pull.”

The sanctity of the space is preserved by a policy prohibiting single men from entering– men are only welcome if they are accompanying a woman, according to Rocket News.