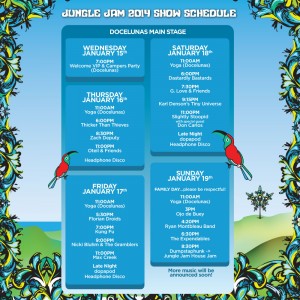 The one-of-a-kind music and camping festival in Jaco, Costa Rica is hosted by the beautiful Doce Lunas Resort Hotel and includes concerts at multiple locations in the area, including beach front venues, late night clubs and local theatres, all designed to create an up-close and personal concert experience.  It is not unusual for bands to play multiple days at Jungle Jam. Nor is it unusual for sets to turn into big jam sessions.

“We are stoked to have some of the best touring bands in America come ROCK JACO once again,’ said Eric Freitas, event producer for Jungle Jam IV. “This year’s line-up represents a mix of genres and styles that fit in perfect harmony with the culture, surroundings and the vibe of Costa Rica.  Roots Reggae, Funk, Soul, Hip Hop, Fusion, Americana, Jam and Electronic it’s all here.”

And this year, the party continues late night with a number of shows and one of a kind experiences including Headphone Disco, one of the most exciting dance party experiences to emerge in years. Where else can you witness one half of a crowd go wild to tough electro beats while the other half get down to some floor-shaking rock n’ roll?  All at the same late night Jungle Jam Party.

Festival tickets start at just $149 for a four day festival pass and $299 for a six day camping and festival pass.  Camping packages include the full access to Jungle Jam IV as well as camping in a secure area and round trip airport transfers.  All the amenities of a top notch camping and music festival will be available including showers, food vendors as well as a General Store. The campground will open on January 15, 2014 and close on January 21, 2014.

A limited number of all-inclusive hotel packages are still available at the Best Western Jaco Beach Resort. Condo packages are available at a number of the best resorts along Jaco Beach including the La Paloma Blanca, Bahia Azul, Bahia Encantada, The Palms and Diamante Del Sol.  All camping, hotel and condo packages include festival tickets and ground transportation transfers to and from San Jose Airport.

The DoceLunas Resort has been the home for Jungle Jam since 2011 and is truly one of the gems of all Central America.  Located among the towering jungle shade trees, the DoceLunas Resort is a three minute drive or a one mile walk from the beach. Wild life abounds and scarlet macaws, monkeys, geckos and anteaters all can be seen on the grounds at DoceLunas. DoceLunas offers all the amenities expected of a four-star hotel, including a full service gourmet restaurant, high speed wireless internet, a spectacular waterfall cave mosaic swimming pool, yoga studio, a full spa and beauty salon and more.

Most Jungle Jam IV performances will take place during the evenings allowing attendees the opportunity to take advantage of all that Costa Rica has to offer from zip line adventures across the rain forest, boat cruises to see crocodiles, surfing lessons, day trips to Manuel Antonio National Park and much more.

For tickets and information visit www.junglejam.com
All performances at Jungle Jam IV are rain or shine.

All dates, acts, and ticket prices subject to change without notice.

Only in Costa Rica for Week of December 30th