It’s Not Just You: ‘Old Person Smell’ Is Real

Remember when you used to go to your grandparents’ house and whenever you walked in, your nose detected a change in the air? You’re not imagining it — there really is such a thing as “old person smell,” and your ability to detect it may have evolutionary roots. 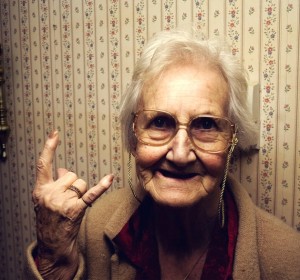 In a study published today in PLoS One, researchers report that young people aged 20-30 are able to accurately guess when a scent comes from an elderly individual aged 75-95. While study participants were also able to determine when a smell was associated with someone in middle age or in their youth, they were much better at smelling old people than young people.

How did the scientists collect the smell samples in the first place? Scientific American explains, hilariously:

In their new study, Lundström and his colleagues sewed absorbent nursing pads into the armpits of T-shirts and asked volunteers of different ages to sleep in the shirts for five consecutive nights. The researchers divided the 44 volunteers into three groups: eight women and eight men between the ages of 20 and 30 (the young); the same number of men and women between 45 and 55 (middle-aged); and six women and six men between 75 and 95 (elderly). During the day, the volunteers stored the T-shirts in sealed plastic bags; avoided spicy foods, cigarettes and alcohol; and showered with odorless shampoo and soap.

The article goes on to note that many animals are capable of marking out the relative ages of others in their species by smell alone, so it’s not implausible that people might be capable of something similar. But humans have a much weaker olfactory system than animals do, so the fact that we can determine anything at all about our peers with our noses is remarkable.

According to Ortega The New Narco Road