Italian Gelato On A Stick Is Now In Costa Rica

Costa Rica Entertainment -Italians first invented ice cream (or Gelato as they call it) in 1565, and never stopped trying to make it better. Gelaterias is where you get your freshly made Italian ice cream. 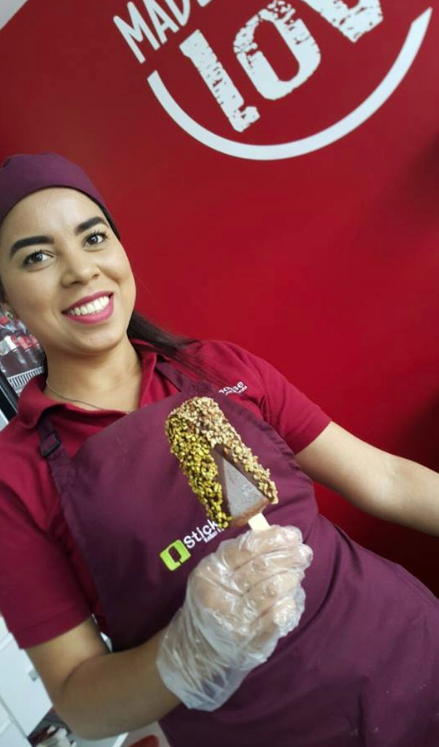 However, that all has changed with the arrival of Stickhouse. Odd name for an Italian franchise, since the word is not even Italian. Stecco is the Italian word for stick.

In the greater San Jose area, there are number of Gelaterias, mainly located in malls or high-end barrios (neighborhoods). Da Noi and La Gelateria are two that continue to do business, while several others have closed after a short business run. Outside the Central Valley a gelato is almost unheard of.

But that will all change soon with the arrival in Costa Rica of Stickouse, an Italian ice cream shop that offers delicious gelato creations are made fresh each day by their friendly and knowledgeable staff.

Who cares, the important is that they are here and will soon be everywhere.

Grupo Forco – owners of Mundo Mágico, Mundo Cosmético and Shoppers – have invested US$500.000 in the franchise to produce some 10,000 gelatos daily.

For now Stickhouse is only available in the Gran Centro Comercial del Sur, south of San Jose, on the major road that leads to Desamparados. But the company plans to have at least 20 locations in the next three years.

Francisco Jara, president of Grupo Forco, explained that the creators of the product maintained the Italian tradition but under the worldwide trend of offering ice cream in a palette.

Stickhouse works globally with three types of sales outlets. The first is a cart, the second a kiosk and the third is similar to a cafeteria where Italian bakery, chocolates and others products.

Currently, in Costa Rica the brand operates with a 10 square meter kiosk. Jara said the next four will the same format that requires an investment of close to US$25.000 per unit.

Where will they be?

Before the end of the year, a Stickhouse will be in Novacentro, on Avenida Central (Central Avenue) in downtown San José (scheduled for this month), Santa Ana or Escazú and finally Barrio Escalante.

“The production plant is capable of supplying our points of sale, home delivery and also to supermarkets that want to distribute our products,” said Jara.

A Computer Will Never Have an Insight