Trending Now
Costa Rican Journalist Awarded Pulitzer Prize
Virgin of the Angels to Protect Costa Rica?
Will Costa Ricans Be Evacuated from Wuhan?
Is Costa Rica’s Irazú Volcano Dangerous?
Cool Winds Expected in Costa Rica For Next...
Teddy Bear Heart
This Font Helps You Remember What You Read
Costa Rican Gives Her Advice About Touring France
New Species of Orchid Named for Costa Rican...
Guy Named Bud Weisser Arrested for Trespassing at...
Home Uncategorized Is US Citizenship Only For The Rich And Educated?
UncategorizedWorld News

Is US Citizenship Only For The Rich And Educated?

World News – Citizenship application costs rose so drastically during the George W. Bush administration that naturalizations dropped dramatically, particularly for legal permanent residents who were poorer, less educated and of Mexican origin, according to advocates pushing the Obama administration to reduce the fees. 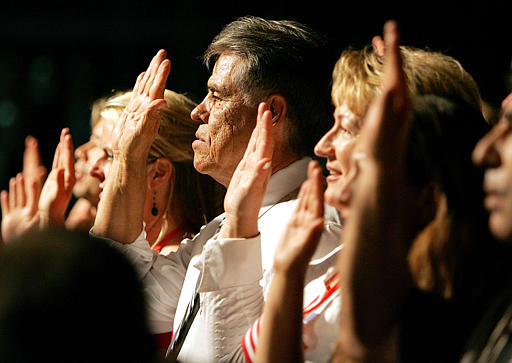 The naturalization fees have remained unchanged under President Barack Obama. Fee waivers exist for applicants who can meet a means test and have household incomes of 150 percent of poverty.

Advocates had asked Obama to consider a partial fee reduction for applicants with incomes between $35,751 and $59,585, which was 150 percent and 250 percent of poverty for a family of four in 2013. They hoped the waiver would be included in the president’s executive action on immigration issued last November.

In a November memo, Homeland Security Secretary Jeh Johnson asked CIS director Leon Rodriguez to consider a “partial fee waiver” for people whose incomes are at that level or to consider implementing a sliding scale fee, but CIS said it could not consider the reductions because of “uncertain financial risk associated with it” for the agency that is largely funded by user fees. In response, Johnson directed CIS to consider it as part of its congressionally mandated biennial fees review, which is under way.

When advocates first asked for the additional reductions two years ago, Mayorkas asked the groups to prove naturalization was price sensitive and that it disproportionately hurts the working poor, particularly Mexican immigrants, Hoyt said.

Manuel Pastor, director of American Studies & Ethnicity at the University of Southern California, said two previous Congressional Research Service studies looked at whether fee increases changed the demand for all immigration services, not just for naturalization, and found that it didn’t make too much difference. Those findings were used to justify fee increases during the Bush administration.

But what the CRS failed to do was look at difference between fees to become a citizen and to renew a green card that resulted after the fee increases. Seeing that green card renewal was far cheaper than naturalization, legal residents opted to keep renewing legal residencey rather than become citizens, Pastor said.

Coupling immigration data with Census data on citizenship status and years of naturalization, Pastor has determined that the share of naturalizations of people 25 years and older with less than a high school degree dropped dramatically, while those of people with a bachelor’s degree went up.

Similarly, Pastor found that when fees went up, the share of those naturalizing who are Mexican American dropped. After the 2007 surge, the share of legal permanent residents of Mexican origin who naturalized, dropped from 19.8 percent in 2008 (naturalizations generally occur a year after application) percent to 12.7 percent in 2010.

“There may be some justification, people argue a lot about this, whether or not you should consider education in the context of who you permit in the country,” Pastor said. “But there is almost no justification once someone is an LPR (legal permanent resident) to say that somebody who is more or less educated should have a right to become an American citizen. That’s positively un-American.”

There were 2 million legal permanent residents eligible to naturalize in households with incomes between 150 percent and 250 percent of poverty for a family of four in 2012, Pastor found in a study done with Patrick Oakford, a policy analyst at the Center for American Progress, a liberal think tank and Jared Sanchez, a USC data analyst.

The fee would be about a week of post take-home pay for people in that income category, Pastor said.

“It’s really clear that we can make a stronger commitment to encourage citizenship and while it needs a lot of elements – English classes, civics classes, community outreach – thinking about the fee waiver is an important part,” Pastor said.

Results of the fee review by CIS could come this winter or spring. Obama’s executive action included a directive to allow families to pay fees in installments with credit cards, which is now being set up.

Get Ready for Costa Rica’s Biggest Drop in Gas Prices in Years (About $0.76 per Gallon)