Is it Time for Costa Rica to Switch to the Dollar?

Letter to the Editor – With the presidential election in Costa Rica just a few weeks away, I am surprised that the recent crisis with a devalued Colon is not being discussed openly and urgently.  While a few newspaper articles have explored the topic, the admittedly unpleasant but nagging idea of Costa Rica changing to the dollar is not explored.  Yet the Costa Rican Currency has been devalued by 10% in the past 30 days and no one knows if the market is done with the devaluation yet. 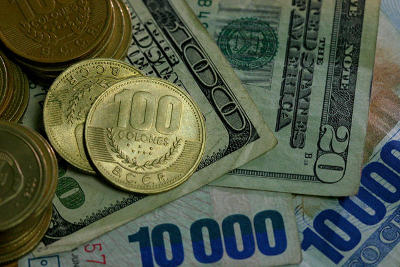 It is one thing when a currency moves 10% over a 12 to 18 month period, but a 10% move in a month is not a good sign, and the market is showing a lack of trust in Costa Rican bankers.  The world bond and money markets know that Costa Rica is coming back to the bond market to sell another round, looking for $1 billion in new financing. The market also knows that it cannot ask for higher interest rates, so it devalues the currency instead.

Throughout history, any time a country tries to defend its currency it never works. The Central Bank of any country is never stronger than the market. That is how George Soros made his money, beating the Bank of England years ago.  Good or bad, the market always wins.

To the hard-working Costa Rican citizens, abandoning the colon in favor of the dollar is an emotional issue, and understandably so.   Such a radical change would seem to signal yet more “Americanization” in a country proud of its accomplishments and heritage.  However, these same citizens, paid in colones, are the ones suffering the most.  As the value of the colon falls, the buying power of their paychecks diminishes, allowing them to afford fewer goods and services.

And what about the estimated 75% of Costa Ricans who have taken out dollar-valued loans for cars, houses and other major purchases?  They are profoundly affected by the falling value of the colon since their loans are paid in increasingly expensive dollars.  Whether recognized or not, much of the Costa  Rican economy is dollar- based, and trying juggle both currencies is now a losing proposition for the citizens.

So now there are very important and timely questions to ask:  It is time to go to a single dollar currency in Costa Rica and abandon the Colon?   Is Costa Rica’s economy is too small to support both currencies?  What does the recent severe devaluation of the colon mean for the average Costa Rican? And most importantly, how do recent events and market indicators affect the Costa Rican economy, its high debt and, since expenses are slow to be reduced, its need for more financing?  These critical questions deserve a robust and transparent debate.

The time for ordering studies and commissions is gone as the all-powerful market is driving the economy further toward the edge of the cliff. The provocative question is— what is Costa Rica going to do about it?

The History of the Non-Costa Rican Army