Costa Rica News – Costa Rica advertises many eco-hotels and green incentives, like the ecological Blue Flag for communities that take care of their beaches. It’s seen as a green country to outsiders and most locals agree with that general consensus. But is it really all that green? 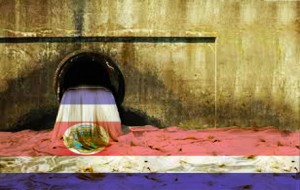 As you see the pollution and sewage in the rivers emptying into the oceans, the waste dumps like that in Perez Zeledon, and the shark finning that happens close to every day in the waters of Costa Rica, questions about how “green” Costa Rica really is, are raised.  Yale University has done a study and found what we already expected, the “green” image that Costa Rica tries to portray to the rest of the world is more just smoke and mirrors.

In 2012, it was ranked 5th in the world by Yale’s Environmental Performance Index, but in 2013, it tumbled way down to 54th of the 178 countries included. Could it be possible that 53 countries are doing better than Costa Rica at being friendly to the environment?

The drop is partially due to the addition of categories to the index in 2013. Wastewater treatment was included and that was the Achilles heel for Costa Rica’s rank. It scored only 0.9 of 100 possible points for the category. Based on wastewater treatment alone, Costa Rica would be 125th on the list.

They have to find a way to control and better the treatment of wastewater and also work on the climate and energy category, in which they got a score of 38.46. Nonetheless, the country has plans to become the world’s first carbon-neutral country by the year 2021.