iPad Pro to Replace the Laptop?

Technology News – The massive iPad Pro went on sale on Wednesday and at least one person believes it can replace the laptop. That man just happens to be Apple CEO Tim Cook. 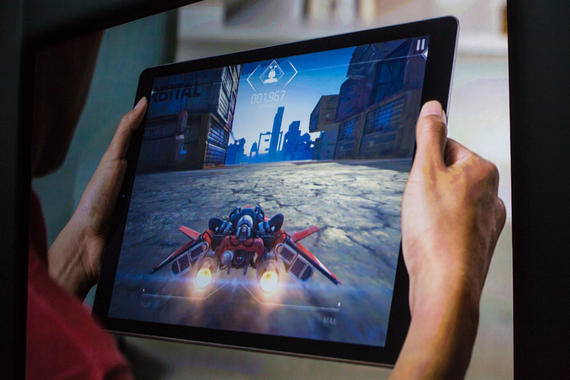 Cook insisted that “the iPad Pro is a replacement for a notebook or a desktop for many, many people” who will “start using it and conclude they no longer need to use anything else, other than their phone.”

The iPad Pro isn’t a normal tablet. Its screen measures 12.9 inches across diagonally, making it much larger than the 9.7-inch iPad Air 2, and it includes a stylus and a cover that doubles as a keyboard.

Market research firm IDC categorizes these devices as “detachables.” While tablet sales plummeted 12.6 percent in the third fiscal quarter of 2015, according to an October report, sales of detachables look to “increase dramatically over the next 18 months.”

Detchables like the iPad Pro are gaining ground on regular tablets. Can they overtake traditional laptop and desktop computers?

“Not in the next five years,” Jean Philippe Bouchard, research director of tablets for IDC, told NBC News.

First, Apple needs to find a way to lower the price of the iPad Pro, Bouchard said. Right now it starts at $799, plus $169 for the keyboard and $99 for the stylus. That makes it more expensive than the 11-inch MacBook Air ($899) if you include the accessories.

Detachables could start gaining steam if Apple starts integrating their Smart Keyboards with less expensive iPad models. And while Microsoft and Apple are hogging the media spotlight, others companies could determine how widespread the technology becomes.

“There is a lot of innovation we’ll see in the next 12 to 18 months from other players like Dell, Acer, Asus and HP,” Bouchard said.

If Apple wants the iPad Pro to replace laptops and desktops, people will need access to all of the software they can use on their laptops and desktops, said Tim Coulling, senior analyst at market research firm Canalys. That isn’t the case with what is available in the App Store right now.

“At the moment I don’t think the iPad Pro can replace everything,” Coulling told NBC News.

Whether they ever would replace desktops and laptops, he declined to make a prediction. But in two to three years, he believes Apple will beef up its App Store enough to satisfy business customers, making it more likely you will see the iPad Pro in the workplace.

Detachables including the iPad Pro and the Surface Pro might have a brighter future than regular tablets, which Coulling calls “consumption devices.” Like smartphones, smartwatches and smart TVs, tablets are all about consuming content.

The iPad Pro lets people create things. It’s not the only detachable transforming the market, but it could do a lot to tempt users away from their laptops.

“The one thing that Apple does well,” he said, “is take a concept and make it fly.”

Over $150 Million Invested in Hotels & Tourism in Costa Rica