The National Meteorological Institute (IMN) announced that for the next six months there will be more dry days in Costa Rica than those days in which there will be rain. The forecast was released yesterday from the director of the company, Juan Carlos Fallas, who said that this is due to El Niño (the period where there are less rain) is well positioned and its effects will be felt in the country until March next year. 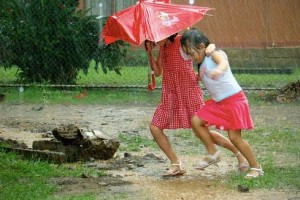 However, Fallas (weather expert) made the warning that, when rainy days, the showers will be short lived but very intense.

In this regard, Walter Fonseca, Chief Operating Officer of the National Emergency Commission (CNE), said those sudden drops of excess water could overwhelm sewers and river flows and cause flooding.

He said that people should remain vigilant in those sites prone to flooding and landslides.

He recalled that this year, although there is less rain, the number of incidents is similar to previous years. On 28 June, a sudden downpour was accompanied by strong winds, which lasted just over three hours, causing flooding and unroofed several houses in various districts of the canton of Aguirre and Parrita, Puntarenas.

It was also reported that this decrease in rainfall will have effects on agricultural production.

Juan Carlos Fallas explained that the effect of drought will have its greatest effect in the Central Valley and the North Pacific. He added that he felt in smaller scale in the central Pacific, the North and the South Pacific.

For the remainder of July and during August provides several heat waves, dry days are interspersed with a few rainy days.

In this same period, but in the Caribbean region will increase the amount of rainfall, especially in the south.

The specialist said it is likely that is more than one time that could be moderate to strong intensity.

Delving into the data, the director of IMN said that during the first half of this year and there was a significant shortfall of rain in most of the country, with the exception of the South Pacific, where the average rain remained in the range normal.

Failure as an example in the station located in the Juan Santamaria Airport in Alajuela, and one of the oldest in the IMN, the month of June was the third driest of the last 31 years.

IMN specialists said that El Niño will also affect the production of tropical cyclones (depressions, storms and hurricanes) in the Atlantic basin, which are affecting Costa Rica.

Although the current season, which began on 1. June, and ends on November 30, is called normal, expected to occur up to 12 cyclones (since there were four without consequences for our country).

It is expected that in the Caribbean generated six, two of which could acquire the status of storms and one become a hurricane.

Juan Carlos Fallas said that these are projections, and should be expected to occur to see if they will have some impact on Costa Rican soil.

Minaet Points Finger Back: Conavi Does Not Need Permission to Clean Border Trail