Trending Now
Costa Rican Journalist Awarded Pulitzer Prize
Virgin of the Angels to Protect Costa Rica?
Will Costa Ricans Be Evacuated from Wuhan?
Is Costa Rica’s Irazú Volcano Dangerous?
Cool Winds Expected in Costa Rica For Next...
Teddy Bear Heart
This Font Helps You Remember What You Read
Costa Rican Gives Her Advice About Touring France
New Species of Orchid Named for Costa Rican...
Guy Named Bud Weisser Arrested for Trespassing at...
Home Fun/HumorCosta Rica Tales If I Can Get Rid of CR Ants, Anyone Can
Costa Rica TalesUncategorized

If I Can Get Rid of CR Ants, Anyone Can

My husband and I live in the jungles of Talamanca in our house made of wood. Like many houses here in Costa Rica, ours is single-wall construction. We built it that way so there would be no hiding place for insects, bats, or rodents. The downside is that my kitchen is exactly one inch from the great jungle that throbs with life 24/7. 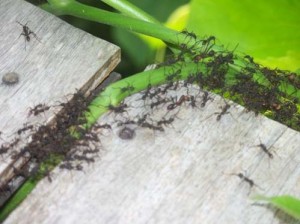 That one inch precept has made me a fastidious housekeeper. Leave a blob of mayonnaise on the counter and bugs will arrive to scarf it up. Leave the dishes in the sink overnight, because I am too lazy tired to wash them, and they will be crawling with creepy things like cockroaches, or worse—the bane of my existence—ants.
I hate ants. I have examined my aversion to them because I don’t hate nature in general. In fact, I’m the one who captures a bug in a glass and removes it to the safety of the great outdoors rather than kill it. I hold no animosity toward spiders, scorpions, or even wasps. Show me an ant, though, and I begin obsessing on how to exterminate it. And that’s the thing, isn’t it? There’s never just one. They come in hordes, a swarm, an invading army. There are colonies of them and they are relentless.
I read recently about a scientist researching treatments for cancer. Because cancer cells divide rapidly and tend to hide within normally dividing human cells, the researcher focused his model for treatment on organisms that use swarm intelligence, and specifically ones that never give up. You guessed it, ants. Place anything in their path and they will find an alternate route. They are the squirrels of the insect world.
Last year we had an ant outbreak that just about drove me insane. I scrubbed the counters within an inch of their lives, sprayed them with ammonia and Clean Green. All of which had the effectiveness of water. Ants scattered out over the my counter tops casually bumping noses and sending messages, no doubt about some delectable food find. Every morning, when all I wanted was a peaceful cup of coffee, I battled them for fifteen minutes or more.
I moved the small compost container (with a snap-on, air-tight lid) from the counter to the kitchen table. I quit using the countertop by the stove to prepare any food. And still ants ran roughshod over those work surfaces. I’d find them coming up the side of the counter. I sprayed. I applied poisons— I know, I know—between the counter and the wall. A few days would pass and there they were again like Jack Nicholson in The Shining—Heeer’s Johnny!— a thick stream of them flowing up the side of the stove, panning out like river deltas, covering my counter. When I began thinking of things like flame throwers to kill them, I knew I needed a permanent fix.
I went to my trusty Macbook and googled ants + eradicate + traps. Countless sites referred to a mixture of boric acid and sugar. It was purported to work, but I was despondent because  I’d already tried that years before it didn’t work for me. Then I realized I’d made the recommended liquid mixture. Hmmmm, maybe if the mixture is dry, the ants will track the boric acid to their nest and infect the whole mess of them.
So I mixed the boric acid (acido borico, available at your local farmacia) and powdered sugar in a 50/50 dry mix and 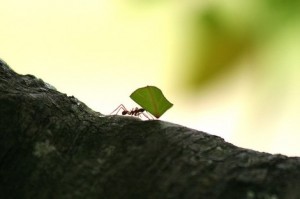 made cocaine-like lines along the backsplash of my countertop. It took a day, but I noticed the ants began to focus on the bait. In fact, within two days they attacked it like addicts, snorting up my little lines of white powder. They ate so ravenously I had to replace the bait almost every day.
I said to my husband, “Well, if this is a far as we get, I’m happy to have them away from my space.” I could now prepare food on the same work surface; the ants stayed with the bait at the back of the counter, eating and tromping around in the mix. They trailed back up the backsplash, through a crack, and disappeared behind the counter.
I left them alone.
The method is not fast, but it has been impressively effective. Within two months I had very few, to no ants. And because I kept the mixture on the countertop, I didn’t have to worry about the dogs getting into it.
*Caution: boric acid is poisonous to children and pets.*
If you use it, keep it away from them. You can do that by putting the mix in a jar and punching holes in the lid. My outbreak (and mental wellbeing) required the ants find the bait post-haste.
How does it work? According to Debbie Hadley in her About.com article, How to Make and Use Homemade Ant Baits (see resources below):
”Boric acid works primarily as a stomach toxin on ants. The worker ants will carry the bait food, loaded with boric acid, back to the nest. There, the ants in the colony will ingest it and die. The boric acid seems to interfere with their metabolism, although scientists aren’t exactly sure how it does so. Sodium borate salts affect an insect’s exoskeleton, causing the insect to desiccate.”
Hadley and others recommend the liquid mixture, but, as I said, it didn’t work for me. The dry mix is easy to control, and, once the ants focused on it, I increased the amount of boric acid in the mix. Eventually to a 3:1 mix, more or less—this is not rocket science. The ants never stopped going for it. They loved it. I removed the bait when they appeared to be gone. When I saw another small outbreak–probably a new hatch– I replaced the bait. Four months later, none. Zero. Zip. Zilch. No more ants.
But I can never get lax in my housekeeping; I’m aware the invading hordes lurk a mere inch from my kitchen.
Sarah Corbett Morgan
Blog: www.scmorgan.com
Facebook Page: www.facebook.com/writer.scmorgan
Resources:
The Frugal Life: Getting Rid of Ants
WikiHow: Three Ways to Stop an Ant Invasion
Mother Nature Network: 13 Natural Remedies for the Ant Invasion
About.com: How to Make and Use Homemade Ant Baits
boric acidcosta rica animalscosta rica antscosta rica housescosta rica lifecosta rica newscosta rica pest controlgetting rid of antshow to get rid of antsIf I Can Get Rid of Costa Rican Ants Anyone Canlifestyles in costa ricaliving in costa ricaTalamancaTalamanca costa rica
0 comment
0
Facebook Twitter Google + Pinterest