Iceberg Almost Ready to Break Off From Antarctica

World News – An iceberg the size of Delaware is poised to break away from Antarctica, an event which may lead to the collapse of a massive ice shelf on the continent, according to researchers. 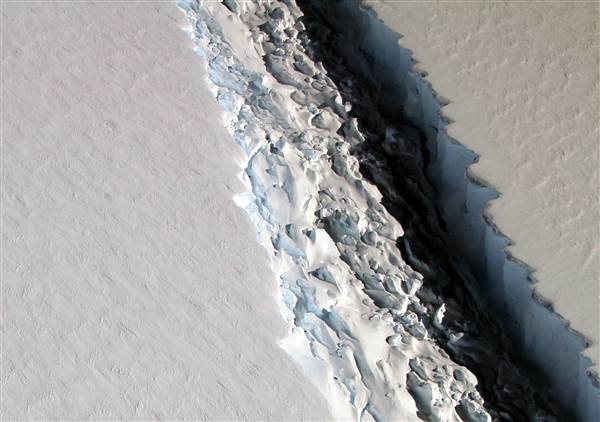 Scientists say that a 1,900 square-mile section of the “Larsen C” ice shelf is now only connected to the main body by a 12-mile section of ice. Researchers monitoring a huge crack in the ice discovered that it had grown rapidly during the second half of 2016 — increasing in size by 11 miles in December alone.

If the iceberg does break away, it would be one of the ten largest ever recorded.

When the iceberg breaks off, or calves, the shelf will lose around 10 percent of its surface area, leaving it at its most-retreated ever recorded position, according to researchers at Project MIDAS, a British-backed Antarctic research project.

“If it doesn’t go in the next few months, I’ll be amazed,” project leader Professor Adrian Luckman, from the U.K.’s Swansea University told the BBC. Researchers had previously suggested that a calving event could take place at some stage in the next decade.

Scientists say that calving events like this one could lead the Larsen C ice shelf to disintegrate entirely, as its neighbor Larsen B did in 2002.

“We think that once this iceberg has gone, the Larsen C ice shelf will be in a less stable position than before, precisely how much less stable depends on what path the crack takes as it propagates,” Martin O’Leary, a researcher on the project, told NBC News. “I think we’re probably more worried that the next iceberg could cause the ice shelf to collapse rather than this time around,” he added.

In November 2016, NASA scientists carrying out an airborne survey of polar ice measured the crack in Larsen C to be about 70 miles long, more than 300 feet wide and about a third of a mile deep.

Scientists have been monitoring the rift on the ice shelf for decades. Researchers told NBC News that the calving event was “part of the natural evolution of the ice shelf,” but added there could be a link to changing climate, though they had no direct evidence of it.

The break up will not directly contribute to a sea-level rise, as the ice is already floating. However, the coastal icebergs buttress the land-based ice and in their absence much more of that ice will flow into the sea. Researchers estimated that if the land-based ice held back by Larsen C fell in the ocean, it could lead to a 10cm rise in global sea levels.

In response to expressions of concern on social media, MIDAS scientists responded that there was no need for alarm. “This is a fairly normal event, although it is spectacular and quite rare.”

How an L.A. It Girl Does Vacation Beauty in Costa Rica