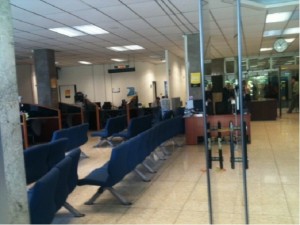 Many unhappy customers that were using ICE in the past switched for better customer service and more reliable signal and cellular service.  It is not the time for ICE to give people more reasons to switch to another carrier, but because it is Costa Rica, they are unable to see the future consequences of their current actions.

The work stoppage called for today by Telecommunications ICE left many service centers vacant and many customers left hanging in the wind an dialing customer service with no answer.

The office of the Instituto Costarricense de Electricidad (ICE) located in Sabana Norte, had the doors are open, but there is there was no official response to the public calls.

A group of eight buses left bound to the Telecommunications (Sutel) on Monday.

There, ICE employees protest against decisions taken by the Sutel and that, in their opinion, affect the Institute and favor private companies. Yes, people want an open market of competition where companies that provide the best service for the best price, and ICE wants people to continue paying for bad service at a high price and no let their financial statements available for public view.

Luis Paulino Granados, leader of the National Association of Workers and Energy and Communications (Anttec), said more than 3,000 workers have joined this protest and offices such as San Carlos, Cartago and Puntarenas, are fully paralyzed. Agencies also are closed in Pavas and Escazu.

Protesters are traveling by bus from La Sabana to ICE and then Guachipelín to walk towards Sutel Multipark located in the complex.

Well this might be a good idea if their were not other options for customers, but there are and this will mark the beginning of the end for the government controlled and managed entity.

Don’t Let Car Rental Companies Take You for a Ride

A Vision for President Obama, and the Rest of Us