Hurricane Harvey; Renewal Of My Faith in Humanity

I have to admit I had lost most hope in humanity probably by being drawn in by a media that wants to divide the country as much as possible based on political views, race, and religion.  But going through Hurricane Harvey first hand in Houston has shown me that we are there for one another and renewed my faith in the human race. 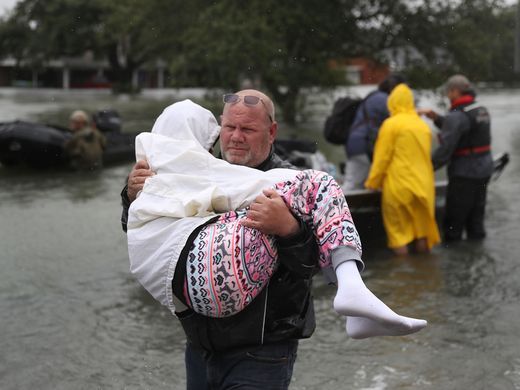 For those on the outside looking in there is no real comprehension of what is occurring in Texas. From Corpus Christi to Beaumont if you are a Texan you or someone that you love and care about has been affected by this storm of the century.

Many will believe this statement above about the storm being a once in a lifetime occurrence is hyperbole.  But if you look at the sheer destruction and rainfall that has happened and is still happening in Texas you can not argue that this is false.

Over the past days over 50 inches of rain have fallen in the Houston area alone.  When the storm struck Rockport it was a category 4 Hurricane.  Houses in Beaumont, Houston and other areas have been flooded causing millions in damage.  There are hundreds of houses still under water as this article is being written.

I am lucky compared to many out there, although there was no insurance on our vehicles or flood insurance on the house, my family and myself have the resources to get everything back in order without causing too much hardship.  Yes there is stress. Yes there is a feeling of loss. But building those material things again will take time but that is just what they are…..material things.

Thousands of people in the Texas area are not as fortunate, they have lost everything and may never be able to get their lives back as it took year and years to get where they are and this storm tore the souls and hope from many a person.

I have gone through earthquakes & volcanic eruptions in Costa Rica, but never felt in any danger in regards to my life.  This is the first time I truly saw the true power of mother nature.

Saturday night watching the news as the storm had been reduced to what seemed like a non-factor, I went to my bed feeling safe and secure. Houston had avoided the worst.  At 7:45 this next morning those thoughts were erased.

I placed my feet on the floor and there was already an inch of water throughout the entire house.  Within another hour it had gone up to 5 inches and the rain kept falling outside.  As we began unplugging various electronics and placing furniture on top of each other it was obvious the water was not going to stop rising.

My dog sat on my bed with a quizzical look as if to ask…Why are we not leaving? Within about 30 minutes the option of staying was taken off the table as firemen showed up at the door to take us to safety.  With my dog in my arms and my computer over my shoulder we were directed to the ambulance to take us to higher ground.

After being transported to a local church we were given shelter by one of my mother’s friends and although wet and exhausted we had survived. We all sat glued to the TV as we watched the events unfold in the area.

We went to see the house the next day and it was destroyed. The house next to ours is still under water.  We were alive that is all that mattered.

Houston came together as one, there was no race, religion, or politics involved in this unity.  Black, white, brown, democrat, republican, Catholic, Muslim, it did not matter as doors were opened and the heroes abounded.  From all areas of Houston and the surrounding areas support was being given from all areas.  While other areas of the country were talking about this is what Texas gets for voting Republican in the last election and you should have evacuated…..we stood together and ignored the words coming from those not living through this disaster.  All those people giving their opinions did not experience Hurricane Rita when the city was told to evacuate. Can you imagine if people were stuck 23 hours plus on the roads trying to get out of the Houston metro area? The death toll would have been enormous as opposed to current numbers. 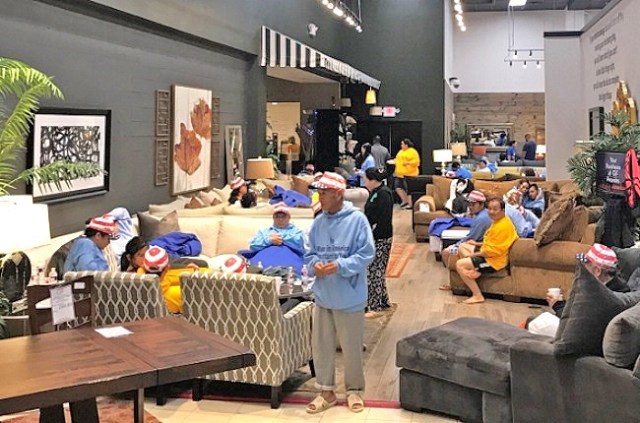 For all of you that do not understand Houston and what we mean by unity and coming together, look at Jim “Mattress Mack” McIngvale, JJ Watt, and HEB.  Mattress Mack as he is known in Houston the owner of Gallery Furniture immediately opened his doors to become a refuge for those affected by the storm. There was no talk about the over $30,000 a day he is losing for doing this….it was just the right thing to do to support the community.  JJ Watt for the Houston Texans came on social media and had a goal of raising $250,000….that number is already over $12 Million to give back the community.  HEB, a Texas grocery chain, mobilized and started its efforts to get food and water to those in need.  The list goes on and on about how this city has come together.  None of the people or entities above will consider themselves heroes but we know inside these acts of selflessness are heroic. Waiting on the government can take time and the people of Houston needed help and assistance now. Through the efforts of this entire city coming together we will push through and go through the recovery process as one.

You saw the heroes everywhere during this storm.  Many of these heroes were the same people that needed rescuing just hours earlier.  I read about friends that were transported to safe areas and then immediately were focused on others. Nurses that had been airlifted or boated from their houses ignoring their own circumstances in order to concentrate on those around them.  This is the definition of Houston, people that are able to put the dire circumstances they are currently in aside to focus on others.

You see the Hashtag Houston Strong #HoustonStrong but it truly should be #TexasStrong…..you really do not know what it truly means unless you live here and have seen a group of people stay as one through one of the most difficult scenarios they will ever go through.  But this does not just apply to Houston, this is a Texas trait.  Beaumont is underwater and the Louisiana Cajun Navy has its boats doing rescues.  Make fun of all the trucks and rednecks in Texas all you want, but those trucks with boats behind them saved thousands of lives.  They did not care what color or religion you were, they just wanted give back as that is exactly what we would have been done for them in this great state. 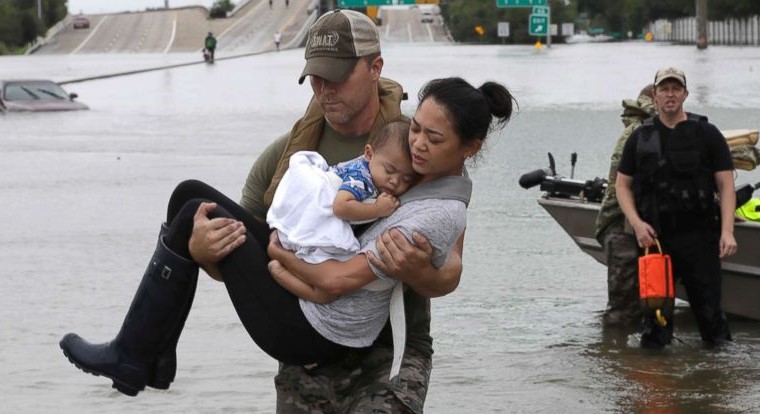 Let this sink in for a minute…..Hundreds and hundreds of small boats pulled by countless pickups and SUVs from across the South are headed for Houston. Almost all of them driven by men. They’re using their own property, sacrificing their own time, spending their own money, and risking their own lives for one reason: to help total strangers in desperate need.

Most of them are by themselves. Most are dressed like the redneck duck hunters and bass fisherman they are. Many are veterans. Most are wearing well-used gimme-hats, t-shirts, and jeans; and there’s a preponderance of camo.

They’ll spend the next several days wading in cold, dirty water; dodging gators and water moccasins and fire ants; eating whatever meager rations are available; and sleeping wherever they can in dirty, damp clothes. Their reward is the tears and the hugs and the smiles from the terrified people they help. They’ll deliver one boatload, and then go back for more.

They’re unlikely to be reimbursed. There won’t be medals. They won’t care. They’re heroes. And it’s what they do.

Thank you to all the heroes out there and thank you for renewing my faith in humanity. Through all the destruction, heartache and loss this storm has brought it has also has given me hope for a better future.  I will no longer be watching the media trying to tear us apart as I know deep down that we are there for each other. #TexasStrong #HoustonStrong

Costa Rica Defeats USA On Its Own Soil