How One Gene Gives Monarch Butterflies the Power to Migrate

World News – After sequencing 101 butterfly genomes, researchers found that just one gene appears to makes a huge difference in the ability of butterflies to migrate long distances — and that finding suggests monarch butterflies came to fly so far because they evolved more efficient muscles. 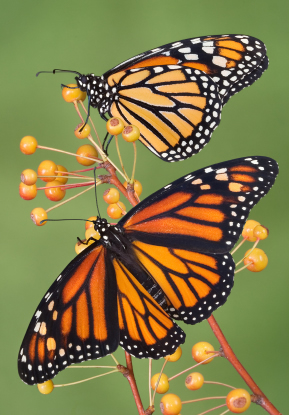 The genetic analysis, published in this week’s issue of the journal Nature, includes some unexpected twists: For one thing, it looks as if the ancestors of modern-day monarchs initially dispersed out of North America — rather than Central or South America, as previously thought. For another thing, a single gene appears to play a key role in giving monarchs their striking coloration.

University of Chicago biologist Marcus Kronforst, one of the authors of the Nature paper, admits that he and his collaborators initially found the evolutionary evidence hard to accept. “It took a lot of convincing,” he told NBC News. But the results show how genetics can explain the origins of a species’ traits on a level far more fundamental than, say, Rudyard Kipling’s “Just So Stories,” said the University of Exeter’s Richard Ffrench-Constant.

“Butterflies are leading a renaissance in our understanding of the molecular basis of natural selection,” Ffrench-Constant, who was not involved in the project, said in a Nature commentary.

To unravel the monarch butterfly’s “just so” story, an international team of scientists led by Shuai Zhan of the Shanghai Institutes for Biological Sciences sampled 101 butterflies, including 92 monarchs as well as nine specimens from other butterfly species. Some of the monarchs were migratory, but others were non-migratory.

One gene, known as Collagen IV alpha-1, signaled a “stand-out difference” between the migratory and non-migratory butterflies, Kronforst said. Further investigation suggested that the gene played a role in building muscle tissue, and that migratory monarchs had a significantly more efficient metabolism than those that didn’t migrate.

“This increase in metabolic efficiency seems to be the result of flight muscle performance, because the difference between migratory and non-migratory populations was minimal when not in flight,” the researchers wrote.

Where the monarch got its start

The researchers also analyzed the different patterns of mutation in the genomes to determine that North American butterflies were closest to the ancestral roots of the evolutionary tree.

Previously, researchers suspected that migratory monarchs originated in Central or South America, and established themselves in North America relatively recently. But the latest evidence indicates that the species got its start in what is now the southern United States or Mexico, perhaps 1 million to 2 million years ago, Kronforst said.

At first, the butterflies probably followed a short-range migratory pattern. The researchers suggest that the North American population began to expand about 20,000 years ago, at the end of the Last Glacial Maximum, when butterflies could more readily feast on milkweed host plants in the American Midwest.

How the monarch got its spots

The other big genetic finding has to do with the monarch butterfly’s distinctive orange-and-black spotted wings. Some monarchs in Hawaii lack the orange color pattern, and instead have white-and-black wings. When the researchers analyzed the genetic differences between the two varieties, they discovered that a myosin gene called DPOGS206617 was strongly associated with wing color.

That particular gene has parallels to a different myosin gene that plays a key role in the color of a mouse’s furry coat. A mutation in that gene leads to mice with less pigment, and the researchers behind the latest study speculate that the butterfly’s myosin gene may play a similar role in transporting pigment to the wings.

Today, migrating monarch butterflies are facing a devastating decline, due to factors ranging from deforestation and drought to a drastic decline in the Midwest’s milkweed. Kronforst said the genetic analysis doesn’t suggest any new strategies for saving the monarchs, but it could emphasize the importance of preserving an iconic species whose way of life goes back millions of years.

“We are seeing possibly the tail end of this phenomenon of migration,” Kronforst said. “To me, it adds a sad exclamation point to the story.”

The End of Tradition