House of Cards Season 4 Review; The Best Since Season 1

Entertainment News – I’m not here to tell you how to absorb streaming content. That’s something you have to tailor to your own needs and likes. I will say that I’m becoming less of a fan of straight-binging. Once all the rage, I now find spreading out shows, even those available all at once, is a better tactic. For my enjoyment anyhow. Watching two or three chapters at a time and then allowing yourself a break. 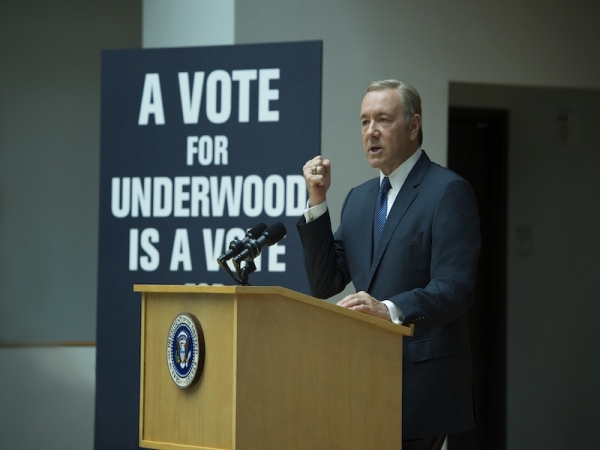 I just thought I’d bring this little note up right at the start, since, overall, I wish I could have spaced out my House of Cards: Season 4 viewing a bit more. But the task of reviewing these Netflix/Amazon/etc shows is still very much a malleable, in-progress endeavor. So as it stands, I watched it all 13 episodes in two days for the benefit of those out there who may have done the same.

That being said, Season 4 is great. It’s the best season since the first. Back before things got sharply Shakespearian-to-the-point-of-self-parody in Season 2 and then unimpressively restrained in Season 3. But make no mistake, House of Cards is still very much a mean show. It’s just a parade of cruelty featuring characters being ruthless to one another. And that’s a heavy load. It can grind on you. Especially after four years. But Season 4 managed to coddle that cruelty while also exploring new shades and dynamics. Ones that really opened the show up like never before. All leading to a really tense, couch-clutching finale.

Season 4 not only had a great array of new characters – Ellen Burstyn as Claire’s ailing mother, Neve Campbell as a bright political consultant (Claire’s “Stamper,” if you will), among many – but it also brought the story back around to Season 1. To the imprisoned Lucas. To the murdered Zoe. To the bamboozled Tom (yes, Boris McIver is back this year in a big way). In the way Season 3 seemed to leave all of Frank and Claire’s sins in the dust, Season 4 dug them all up and helped make the series feel connected and encapsulated instead of just a long string of shadiness and stabs to the back.

So the past is present again. And along with old ghosts come old faces. Remy. Jackie. Raymond Tusk. Mixed in with Season 3’s (Lars Mikkelsen) Petrov, Heather Dunbar (Elizabeth Marvel), author Tom (Paul Sparks), and Kate Baldwin (Kim Dickens). Creating a very compelling mosaic. Still a slimy, sordid collage, but a much more fully realized one. Season 4 felt made the series start feeling like a story that could have an ending rather than just a procession of pain.

If one were looking for weak elements this season, they’re to be found at the top. As the show picks things up right where we left off at the end of Season 3. With the fresh, bitter divide between Frank and Claire that bubbled up while stumping on the campaign trail. Frank and Claire continue their manipulative tug of war for a while as Frank’s campaign finds itself in dire straits. Structurally though, if one were looking to break up a binge, the first six episodes almost tell a complete story. Making for a good resting point by the time it’s done. And I think that’s something I appreciated about Season 4. It all takes place on the 2016 campaign trail, but it can also be broken up into smaller, ingestible arcs.

The back half of the season brings in the topics of gun control, ISIS (or “ICO” here), and an all new savvy adversary in the form of Joel Kinnaman’s Will Conway – a young war-tested New York republican with “perfect” wife and kids. A wholesome, military-based candidate who’s also just as conniving and duplicitous as Frank. While also tuned into newer-era methods of reaching voters, like webcam broadcasts, Instagram, search engine manipulation, and other online methods that appease his rampant narcissism. He’s a vital addition to the season and one that gives this run a great back-and-forth adversarial dynamic. The only way Frank and Claire are able to combat the Conways are by attempting to convince the public that their closeness goes “beyond” that of a normal marriage.

Because let’s face it, sometimes the breeze blows the way of the Underwoods and sometimes things just fall apart for them. When it’s random – via some type of happenstance – it feels empty. And just sort of adds to the malaise of the series. When it can be pin-pointed though. When the Underwoods’ losses are the intentional result of other forces, it can be a lot of fun.

Michael Kelly’s Doug had himself a great arc last season. One leading toward redemption only to find him crumbling into deplorable madness in the finale. Here, Doug’s back in the game, high on loyalty but frighteningly low on ethics. Ready to do whatever it takes to serve Frank. Even something so wicked that it sort of breaks him heading into the second half of the season… which itself leads into something immeasurably creepy later on. Good old Doug.

Kevin Spacey and Robin Wright are spectacular, as per usual. Really, some very thoughtful, moving performances. Even when opposing one another (which aren’t the best parts of the show) they still both provide stabilizing anchor for all the chaos. With their respective resolve and drive. United or apart. And while the first few episodes of the season feel more like an extension of Season 3 than a new charge ahead, things are helped greatly with the addition of Claire’s mother Elizabeth (Burstyn). A strained relationship to say the least, Claire’s trips home to Dallas serve to both humanize and vilify her. And Burstyn is exceptional, naturally.

House of Cards: Season 4, though low on hype (hard to be a standout show now that Netflix has a new original series every week) helped bring the Underwood saga full circle. Yes, there’s still gas left in the tank — the show has already been renewed for Season 5 — but it doesn’t feel like much more. The ride’s about to end, I’d say. And that’s really for the best overall. This should be a snake with a rattle for its tail.

By both charging forward with new stories and dutifully returning to the path of destruction Frank and Claire left in their wake to make it to the White House, Season 4 helped clarify the series as a whole. While also providing a good share of shocks, surprises, and horror. No, there are no direct parallels to the campaigning that’s going on right now for the upcoming U.S presidential election in real life, though there are moments where certain themes bleed through, making the hair on your neck stand up. And the ending is singularly terrifying.