Hottest Day Ever Happens in Australia

Talk about either needing to be in a pool or inside with A/C. A temperature of 45.8C was recorded at Observatory Hill in the city at 14:55 local time (01:55 GMT). Some areas in the wider Sydney region were even hotter, with the town of Penrith, to the west, registering a temperature of 46.5C. 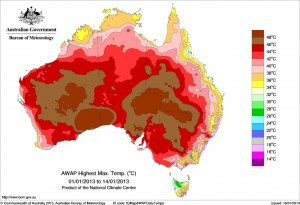 In Victoria state, one man has been killed by a bushfire, one of dozens raging across southern Australia.

State police said the body of the man, who has not been identified, was found in a burnt-out vehicle close to Seaton, a small town some 200km (120 miles) east of Melbourne.

He is the first person confirmed to have been killed by this year’s fires, though a firefighter died while tackling a blaze in Tasmania earlier last Sunday. Officials have not yet determined how he died.

Firefighters are still battling dozens of wildfires sparked by the intense heat in New South Wales and Victoria.

The small town of Licola in eastern Victoria is reported to have been cut off by a 44,500-hectare fire, as its sole access road is blocked.

Officials said dozens of people had been evacuated but 10 locals were still there.

Rob Gilder, a sheep farmer, said he and two employees had found themselves trapped on their farm and were “in grave danger”.

He told the Herald Sun they were taking steps to protect their house and farm equipment, but that he was concerned for 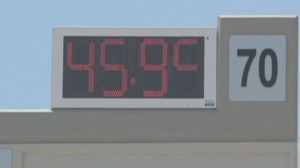 his livestock, and that the situation could worsen.

“I am very worried. But I am hopeful that one of those helicopters will come and get us but I think the smoke might beat them.”

Australia faces wildfires each year as temperatures climb. In February 2009, on what has come to be known as Black Saturday, 173 people were killed in fires in the state of Victoria.

On Friday, Prime Minister Julia Gillard attended a memorial service for fires in 2003 in the capital, Canberra, which killed four people and destroyed thousands of homes.

She reminded Australians to “take the appropriate precautions to stay safe and monitor information from local emergency services as they work to protect lives and property”, the AFP news agency reports.

The previous recorded high in Sydney was in January 1939, when the thermometer topped 45.3C at Observatory Hill.

The Bureau of Meteorology said in a statement that Friday’s record-setting temperatures “were not limited to Sydney, with records being set along the coast from Bega (44.6 °C) to Williamtown (44.8 °C)”.

“The highest temperature recorded in the Greater Sydney Area was 46.5 °C at Penrith, where observations started in 1995.”

Sex With Client is Billed as Services Rendered

Shipping Your Belongings To Costa Rica