Entertainment News – It truly amazes me that people can act so trashy, but in the world of Hollywood I guess materialism and looks matter more than being a good mother.  This coming after the Kimye decided to name their child North…..North West. 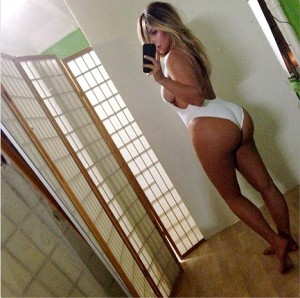 Reality TV’s most famous booty is back on full display! Kim Kardashian shared her most revealing, sexiest post-baby body selfie so far on Instagram late Wednesday, Oct. 16. Four months after the birth of daughter North West, the 32-year-old gave fans what they want: A bathing suit self-portrait.

Clutching her iPhone, the currently blonde star gives a sultry sideways glance in a skimpy one-piece which shows off her world-famous booty and a startling amount of sideboob.

It’s the latest evidence yet that Kanye West’s love is hard at work honing her figure back after Nori’s June arrival. Earlier this week, Kardashian revealed to fans that she’s been doing the Atkins diet to slim down.

“She is eating lots of lean proteins, healthy fats like nuts and avocado, carbs, fruits, veggies and cheese,” a rep for Atkins told Us Weekly. “She wanted to be a healthy, nursing mom and not toxify her milk with her diet or lose weight too quickly. She’s been doing Atkins since her doctor approved it at the end of June.”

She and her rapper love West, 36, were also spotted sweating it out together last weekend at a Barry’s Boot Camp in Sherman Oaks, Calf. “They were cute,” an observer said. “[They were] smiling at each other in the mirror when they were running side by side on the treadmills.”

After Kanye’s interview on Jimmy Kimmel, the naming of their child, and a daughter that gets to know her mom is posting photos like a Del Rey hooker…..is there any chance we can neuter both of these people that have no business having a child?