Homeless Veteran Files Lawsuit Against Couple Who Raised Nearly $403,000 for Him

World News – Attorneys for a homeless veteran filed a lawsuit Wednesday against a New Jersey couple who managed a viral GoFundMe page that raised nearly $403,000 to get the man off the streets. The lawyers claim the couple mismanaged the donations over the past 10 months.

Kate McClure, of Florence, New Jersey, and her boyfriend Mark D’Amico raised the funds for Johnny Bobbitt, the homeless vet, after he gave McClure his last $20 when she ran out of gas while driving in Philadelphia. The couple then put together a GoFundMe page that went viral but, 10 months later, Bobbitt’s lawyer told NBC News that her client is back on the streets because D’Amico and McClure are withholding the funds.

The court documents filed Wednesday in Superior Court in Mount Holly, New Jersey, asks for an injunction against McClure and D’Amico and that the money donated by approximately 14,000 people for Bobbitt be returned to him. It also claims that the couple committed fraud and conspiracy.

The lawsuit alleges that McClure and D’Amico used the “GoFundMe account as their personal piggy bank to fund a lifestyle that they could not otherwise afford.” 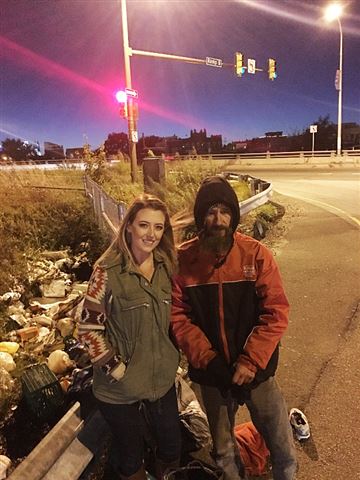 In an interview with the Philadelphia Inquirer this weekend, Bobbitt claimed that McClure, who works for the New Jersey Department of Transportation, and D’Amico, a carpenter, spent the money on a new BMW and vacations to California, Florida, Las Vegas and the Grand Canyon.

D’Amico admitted that he spent $500 of the money at a casino, but claimed he paid it back.

But D’Amico also insisted to the Inquirer that he won’t give Bobbitt the money until he is sure the veteran is free of drugs, stating that he would rather “burn [the money] in front of him.” Giving money to a drug addict, D’Amico said, would be akin to “giving him a loaded gun.”

The lawsuit also seeks damages, interest and counsel fees from McClure and D’Amico. It calls for a clear accounting of all the donations to the GoFundMe account and requests appointing a guardian ad litem, a person assigned to advocate for someone who is unable to represent themselves due to mental illness or age.

Bobbitt’s lawyer, Jacqueline Promislo, did not immediately respond to comment about the court filing, but previously told NBC News that they had planned to meet with D’Amico and McClure earlier this week to get a clear accounting of the funds.

D’Amico and McClure could not be immediately reached for comment.

In an interview with NBC’s Megyn Kelly Today, McClure called Bobbitt “family” and said that she worked tireless hours to get together the documents for Bobbitt to open his own bank account. In that time, D’Amico said that Bobbitt began spending his money on drugs.

The couple said the money was in their account, but they claim that they did not use any of the money. D’Amico told Kelly they would allow a forensic accounting of the remaining funds, which they believe may be as little as $150,000 after Bobbitt spent money on family, a trailer, truck and drugs.

McClure began to cry when Kelly asked about the death threats the couple had received since the Inquirer story published over the weekend.