Heredia Soccer Team Advances to Second Round of CONCACAF

Costa Rica News – Since it is the world’s favorite sport and the Costa Rican team is advancing we have to report on soccer today.  Although I played in high school I am not the biggest fan of watching matches unless it is EPL games. 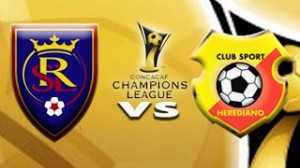 The Herediana soccer team took a  draw against Real Salt Lake (RSL) to advance in the CONCACAF tournament.

The final score of 0-0  placed the team into the second round of the Champions League Concacaf.

Despite several challenges in the first half, they made it to halftime scoreless.

The U.S. team, which played without striker Alvaro Saborio, took control of the game and came close to opening the scoring on several occasions.

The clear choice came at minute 11 ‘, when a defensive mistake and poor clear by the goalkeeper Leonel Moreira allowed the striker Fabian Espindola to be left alone. However, the Argentine striker’s shot hit the horizontal bar and went wide.

Yendrick Ruiz, at the 56 ‘, had the best opportunity for the Costa Rican team when a ball hit the crossbar.

The Costa Rican team maintained control and  frustrated the Americans.

Heredia needed a draw or lose by a single goal to advance to the next phase.